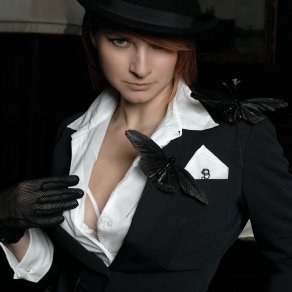 Interview done in 2009  in Rotterdam, the epic centre of all creations by Marlies Dekkers.

After Marlies Dekkers- a young lingerie designer and entrepreneur from the Netherlands, finished her studies in fashion design with great admiration by the jury some 15 years ago, things have gone almost impossibly fast and prosperous for her brand.
She has received various awards this year among which is the designer of the year award , the business woman of the year award  and CILA in the USA. Besides these internationally acclaimed prizes she will open her 10th store in a row in only 6 years time. After Antwerp, Amsterdam, Hong Kong, Paris and Berlin among others New York is to follow next September.
An interview partly explains how things in her designers life have developed in the last 15 years. And which kind of things have been important attaining success.

The last time we spoke one another 6 years ago, you were about to open your first shop. In September you will have 10 shops spread around the world. How do you account for the approval of an international  audience of this size?

Well I suppose that three important factors have played a mayor role: a reliable company which makes outstanding designs with a perfect fit.

Hong Kong played a very important role in the growth of the brand just after the producer in Belgium quit who was doing your production till then.

I met top-producer Andrew Sia in Hong Kong, who – after he had seen my designs -said : ‘I am going to make you a star!’ He literally saved my life and my company. Until that moment I was simply worried of going bankrupt, so I was really emotionally  taken by that moment.
He also improved ‘ the make’ that my designs have nowadays. When I first got to Asia people would look at my bra’s and ask questions like:
’ Did you make these on your own sowing machine?’ In Europe there is just not so much technical know-how in my branch.

Are you trying to tell me Europe does not have enough technical skills to produce your designs?

Obviously there are other places in the world where my work could be produced. The thing is that the whole production line is so complex. Seen the fact that we have a tolerance of no more then a millimetre only companies working according to ISO standards can actually make what I design. And many of them are operating in China.

How do you expect fashion trends to develop?

(Silence..)
Well this is not really my cup of tea. I design and make what I see fit. Things that I feel, that are wavering somewhere out there in the air. I do not deal with styles or trends and I guess that trendsetters in general are not occupied with the question if they are at all trendy. So I can’t say because it’s simply not what I am good at.

Do you still have time for individual contact with clients and do people ask you to design a certain item for them?

One cannot make haute couture without making prêt-a-porter. People say my work is closer to art then fashion, but you still need to produce all of it first. People ask me to make private or single items, but I cannot any longer fulfil their demands. Also it would cost too much. Developing a single bra for example would exceed 20 thousand Euros to begin with.
In the first 5 years of my career I was only able to make collections when I had funds and time. Spring, Summer, Fall, Winter….
I couldn’t provide that at all! I did almost everything by myself with a small team by my side: packaging, delivery, sales..
Today I can truly say that I make 7 collections each year but it is true that running a company of this size needs fine-tuning and is extremely time-consuming.

What is it that you personally like to wear ? Or: What does clothing mean to you?
Clothing is a reflection of my inner state of mind. If you would know me well enough you would be able to tell how I feel by the way I dress. For the exhibition I am doing in Rotterdam, I researched 15 years of documented photos and videos.
From this footage I can tell how I felt at a certain moment in time because of what I wear. I personally like the work of Paul Smith for example.

What kind of people inspire you?
(Silence ..reflects..)
I admire people who want to reach the ultimate. For example I am fond of reading the sports pages, because athletes need to be so focussed and driven. Even if they do not win a first prize they still need that disciplined character and drive.
I guess I see myself in them.

But being successful does not necessarily mean that person is talented. In one of my shows I used music by Arvo Part for example. That man is completely focussed on making marvellous music, but he is completely underrated and I believe he lives in a house the size of a fitting room somewhere in the Ukraine. But he is a genius and works from his passion while trying to get that out.

Film director Peter Greenaway has been crucial to me. After seeing ZOO
( A zed and two noughts) my entire life took a different turn.
He personally came to see my fashion show last January but then I still felt too shy to go over and talk to him, I guess because I still think too highly of him. 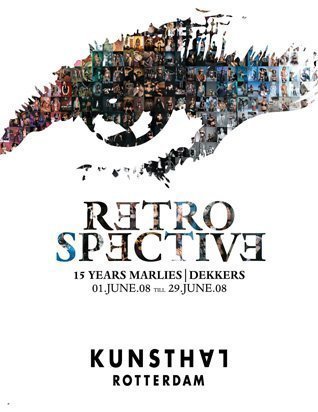 The first of June 2009 “ de Kunsthal’ in Rotterdam opened an exhibition around her 15 years anniversary. When I walk around I spot images and texts from Alfred Hitchcock, Peter Greenaway, George Bataille among many other contemporary artists.
A massive crowd is waiting to get access to the premises when people inside cueing are treated to a glass of champagne. The audience slowly progresses throughout the entire space the size of a soccer field filled with a variety of images, installations, video’s and objects related to her work. A DJ is playing records, loud and clear.
`I am so happy !!´Marlies tells me when I congratulate her on this exhibition.

How could any girl with an ordinary background like hers but with a keen eye on woman and clothes get this far.?!

The statement ´dare to be´ and hard work have been the key elements to her success. And there is definitely more to be expected in the  years to come.