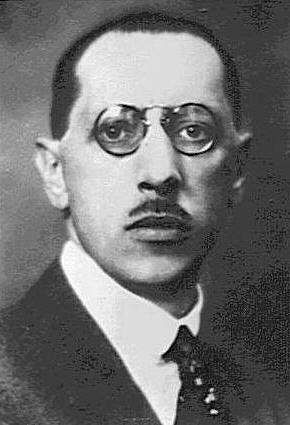 Igor Stravinsky cut most of his law school classes and spent more and more time studying orchestration with Rimsky-Korsakoff. For  Diaghalev’s dance company he wrote the ballets Firebird, Petrouchka, and Rite of Spring. The latter was written in 1911 and caused a sensation at its Paris premiere where shouts and screams of protest were heard, even the firing of a gun. The music itself was so revolutionary that the entire Modern period of music is often dated from 1911 and from the composition and  premiere performance of the Rite. A true Diversifier (sign of Gemini) in his approach to music, Stravinsky wrote in many different styles and composed musical commentaries and arrangements of well known pieces of Pergolesi, Tchaikowsky, even Happy Birthday (he called it Birthday Greeting and it reminds one a bit of Jimi Hendrix recreating the Star Spangled Banner).

The Rite of Spring itself was an exceedingly complex piece for the time, written for large orchestra, changing time signatures and tonalities with dizzying frequency. It is a savage, highly dissonant, disturbing work which in one go cuts Western music adrift from anything written before it. This single composition opened the floodgates to musical freedom (some would say anarchy), making almost anything possible for new generations of composers who followed.

Stravinsky also showed interest in folk music, medieval and renaissance compositions, baroque, classical and romantic music, incorporating elements and compositional techniques of many periods and composers into his colorful, playful, witty compositions. He also wrote for a wide variety of instruments – piano, voice, chorus, orchestra, plus opera, oratorio and chamber music.  Following his departure from Russia to live in Paris, he later relocated to California and at the end of his life to New York City.