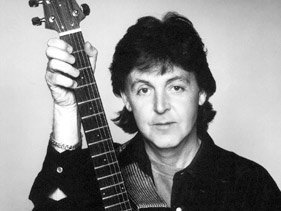 As possibly the most financially successful creative artist of all time, McCartney’s position raises the whole question of how the artist’s work is accorded recognition and reward; also as to whether success has a limiting or negative influence on the expression of creativity itself.

That paintings done by Vincent van Gogh could not even attract interest let alone sales during his lifetime and today can fetch millions of dollars at auction highlights another aspect of this issue. McCartney was financially successful, while Van Gogh was not, yet the absolute monetary worth of their work today is extremely high. The romantic characterization of the pure artist who shuns social and critical acclaim and financial reward, the starving artist in the garret who produces high quality art only for the work of art itself, has more or less disappeared from today’s art scene. Artists are more aggressive now about having their art recognized. They know the vast influence of the media and seek space in newspapers, magazine, on TV and the Internet.  Nor is a stigma attached to the word “commercial” as was prevalent in the 1950’s (in jazz circles for example being commercially successful was the kiss of death.) Thus we might say that Paul McCartney has become more a model for today’s artists than Vincent van Gogh. Both share a high creative output, but the young up and coming artist today demands to be recognized and rewarded.

Are we to assume then that McCartney worked only for the sake of fame and money, while Van Gogh’s artistic vision was more pure, treating art only in and of itself, preserving his artistic vision? Not really. Times change. The position of the artist in society today is a very different one from that in the late 19th century when Van Gogh did his paintings. Aside from reward and recognition, we must also consider an artist’s influence on other artists, and here Paul McCartney both as songwriter and performer has exerted an influence in popular music commensurate to that of Van Gogh in painting. This is true not only for McCartney being a model for other musicians in his field as a pop star during the meteoric rise of The Beatles, who came out of a humble Liverpool working class background, but also his image as an extremely successful financial magnate, who has also developed himself as a writer, painter, and symphonic composer.  Looking at the musical development of the group from their early days as a skiffle band, doing rock and roll covers like Twist and Shout, through the albums Rubber Soul, Revolver, the White Album and Sergeant Pepper, it would seem that financial success did not impede or cripple their creative output, but in fact actually aided and stimulated it.