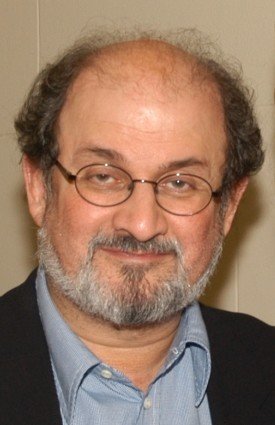 In this case the spark that Rushdie generated with his controversial, some would say inflammatory novel, The Satanic Verses, almost succeeded in physically blowing him up. A book bomb which was to be mailed to him did however manage to destroy the bomb maker along with two floors of a hotel where the device was being worked on. Although others have been injured and died in riots over the book, Rushdie has been well guarded and has managed thus far to escape serious personal injury.

Achieving headlines worldwide was something that occurred when Iran’s leader Khomeini’s issued a fatwā (death sentence) on Rushdie, demanding his execution. Rushdie was guarded 24 hours a day and somehow the huge storm blew over. He apologized but later it was reported that he said his apology was just words. Who and what are we to believe? The publishers of Rushdie’s books certainly did not complain about their mega-sales, nor did he, although perhaps he cried all the way to the bank.

This whole issue raises the question as to what relationship literature has to politics, if any. Many writers construct novels that are based on a dynamic interaction between their protagonist and the society in which they live. This delineation and interaction between personal and the social elements often generate the real driving force behind the writing and sustain the interest of the reader. Notable writers who laid great emphasis on social conditions, often to the point of becoming outspoken social reformers, satirists or political spokesmen were Charles Dickens, Emile Zola, Leo Tolstoy, Jean-Paul Sartre, Voltaire, Jonathan Swift and George Orwell, to name only a few.  Each had an agenda, a cause to promote or defend, in some cases a full-blown philosophy.

Rushdie is a writer, not a politician, but in publishing The Satanic Verses he crossed a line that brought him into direct conflict with Islam and with countries like Iran. Is it possible to define what that line or boundary is, between literature and polemic, art and propaganda, narrative fiction and objective satire or social harangue? We can only observe in the case of a great writer, like Dickens, that  works like Oliver Twist and Bleak House while bringing appalling social conditions to light also succeeded on the more literary levels of narrative, characterization, and plot despite going very heavy on the elements of setting and theme. Unlike Zola, Tolstoy and Sartre who intentionally put themselves before the media and become centers of massive social controversies, Rushdie’s life today indicates that he is more interested in doing his work than in attracting attention to himself or to a cause. Of course there have been extremely private writers who refused to even be interviewed or speak about their work and buried themselves in academic or solitary hideaways, withdrawing from the world to contact their internal muse and only write. Samuel Beckett, William Faulkner, Virginia Woolf, James Joyce, Gustave Flaubert were of this type of literary craftsperson who might be said to have written out of an art-for-arts-sake orientation.

Perhaps only the greatest writers (and only in certain of their works) have truly succeeded in melding the personal and social aspects of the novel: certainly Tolstoy in War and Peace, Dostoevsky in The Idiot and The Brothers Karamazov, Thomas Mann in Dr. Faustus, Victor Hugo in Les Miserables and William Faulkner in Absalom! Absalom!

Time will be the arbiter as to whether Rushdie’s works are of high enough quality to join such a select group of literary artists.