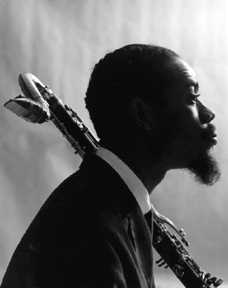 Dolphy is the supreme example of the highly conceptual, avante-garde jazz musician who was largely unappreciated in his time. A master of the bass clarinet, an instrument he personally introduced into jazz, and also a flutist and alto saxophonist, Dolphy was the musician’s musician, a free jazz pioneer whose harmonic and sound solo explorations pushed the outer envelope to the limit, often going too far out to be at all understood by the jazz listening public or even jazz critics.

He was, however, highly valued by the most eminent jazz musicians, such as John Coltrane, Ornette Coleman and Charles Mingus, with whom he often appeared and recorded.  Dolphy was featured on Coltrane’s album Live at the Village Vanguard, and received his greatest exposure to the public on the legendary cut called Spiritual.

Living a tragically short life (died at 36), Dolphy’s accidental death was apparently due to an insulin-related episode precipitated by physicians not knowing he was diabetic. Being born on the Cusp of Magic (June 19-24) on the Day of Ecstatic Appeal, Dolphy was a wizard on many wind instruments who could weave magically hypnotic solos that entranced his audiences. A true master instrumentalist, Dolphy’s solos were highly creative and made no compromises to the ability of his audiences to follow them.

Although only a few recordings of his playing were issued during his lifetime, many more are now available to the listening public. Many can only, even today, take his solos in small doses because of their extreme dissonance and far-out conceptual ideas. As with Mozart and Schubert, it is interesting to speculate on what directions his playing would have taken should he have lived beyond his mid-thirties.

He and Paul McCartney (see June 18, The Day of Financial Security) make an interesting point of comparison, the latter becoming one of the most widely heard, appreciated and financially successful musicians with the most famous band of his time, and Dolphy one of the more unknown, unappreciated and least understood of those on the performance scene. These two poles, that of the glorified pop musician and the creative but largely ignored or disliked jazz musician strikingly illustrate the directions that are available to the most highly talented musicians to take, even today. One choosing to follow the path of fame and fortune, the other listening to his inner voice, serving God rather than Mammon, in the purest sense, following his artistic vision even when his audiences were left behind.