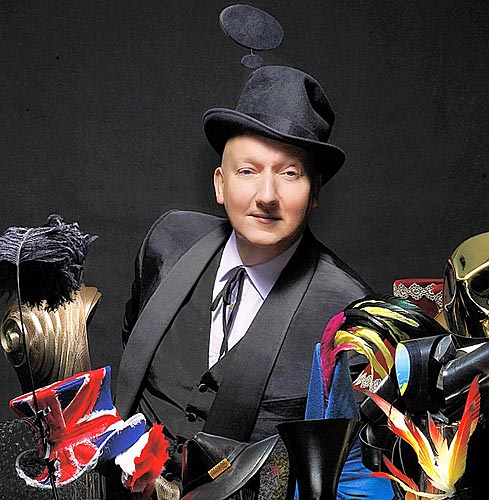 The Fashion Museum  MOMU in Antwerp dazzles us once more with an unexpectedly interesting solo-exhibition. This time the Brittish hatmaker Stephen Jones is ”in vogue”.
Not just magazine covers like Vogue, I-D and The Face  have been embellished with photos of models wearing his creations. We have all frequently seen his hats over the last 3 decades without realizing they were his work.

The well organised and lighted decor for this truly special one-man show was curated by Kaat Debo and Geert Brulot who also did the scenography. He is along with Eddy Michiels the proud owner and collector of many of the artefacts after they met Stephen Jones 22 years ago and continued collecting his hats ever since that moment. Many of the 120 precisely designed hats displayed come from this private collection.

Thematically the objects are placed under the following main topics: Adventure, Science, Rococo and Glamour.
In collaboration with one of Belgium’s most eccentric designers Walter van Beirendonck, the separate cylindrically shaped wing of the exhibition is dedicated to the special cooperation between the two designers over the years.
The Walter van Beirendonck label W&LT (Wild and Lethal Trash) with its extravagant use of fabric and colour form an outstanding palette for Stephen Jones to work with.

Along with contributions of Rei Kawakubo and Vivienne Westwood  an important part of the exhibition is dedicated to rococo and the way it is influencing design in relation to breaking down the dominance of symmetry in form and culture.

The only thing that is a bit troublesome is the fact that in some cases we see the objects and their details from only meters away, as they are surrounded by boxes scattered all around the exhibits.

This prevents people from touching or even taking the hats – some as small as a packet of cigarettes – in their hands to study them. Not to mention the option of visitors stealing them as all creations are true collector’s items and therefore unique.

Start
After graduation at St Martins College Stephen Jones’ early creations were worn in the punk and new wave scene in the late ’70’s in London and were immediately picked up by the media. While making statements against the regime of Margaret Thatcher at the time through their clothing and music, a mixture of artists met in clubs like The Blitz or Le Beat Route of Hell.

In that respect we can see Stephen Jones as part of a self-educated movement which later gave birth to well established artists individually scattered all over the world..
For example, people like Princess Julia, Steven Strange and Boy George have worn his creations. Today they are unmistakably linked to the grand world of fashion, glitter and glamour.
Today Cristian Dior and Comme des Garcons, among many others, cannot do without his ”toppings” for which designs he is given ‘’carte blanche’’. Being on top of the artform of hat design, Stephen Jones is still a wonderfully cheerful and warmhearted person as can be seen in numerous videos and interviews.

On Top of the Artwork of others
Designers who often work with the exuberance of Galliano have also found the way to Stephan Jones’ atelier and shop at Covent Garden in the heart of London.

Galliano once said:
“Over the years Stephen and I have created an astonishing range of hats and have developed a creative shorthand, and friendship, that is built on trust and mutual admiration. The complement between fashion and accesory is seen time and time again in my collections on the runway… I do not want any hat – I want the right hat.”

This timelapse from past to present time is well documented and this gives body to the ‘’lust for life’’ feeling that the exhibition breathes and transmits. We could consider all of these creations to be like delicate artworks in pastry with a cherry on top with a short shelf life (as fashion is a shortlived experience).

Probably that comparison is a bit too far fetched; Stephen Jones is simply – as also many of his colleagues describe him to be – a true artist with an endless lust for creation, shape, material and design.
The abundance is in his mind and he simply translates it to the world around him. And he baptizes his creations with names like: ‘’Funk the Fame, Pericolo, Ecstacy, Coloratura or..Nice.’’

Striking punctuation
Stephen Jones would probably solely dedicate his life to creation itself. Each new hat design is a new exciting experience for him as he sits down behind his drawing table.

What is striking is the way he really grasps the essence of a collection in a hat, therefore reinforcing the entire work of a fellow craftsman. Stephen Jones received awards on several occasions for his oeuvre as can be seen in the documentary on his life which is screened in a cosy projection space adjacent to the large exhibition.
The film shows many stars of world fame as they order Steven’s hats made for them exclusively.

Is Stephen Jones just a Mad Hatter living in his own wonderland?
The question is in which way the work of this wonderfully ”mad hatter” should be credited  in the context of fashion.
His hats are truly the topping of a collection and do give the ultimate final touch to the work of many designers.
One could not merely say his work is the finishing touch to another man’s collection, but as he is such an important connoisseur and craftsman – what DO we call him!?
By the way: Stephen Jones himself got his ideas from films or from life itself – nature, nightlife, operas, popular English culture – you name it; it is all in there!

The curators of the exhibition ”The Accent on Fashion” have achieved in fully capturing the entire span and the impact of his work and tmaking us more aware of the power and use of hats.
In the case of Jones’ creations: all that can be worn around a man’s head. There is still hope for all men and women with or without an abundance of hair to hide or make use of.

The use of the word accent in the title‘’The Accent on Fashion’’ should be understood in at least two ways:

2) In its graphic sense: as an accent is pointing to the left or right: giving it a direction often in  a 45 degrees angle

3)Thirdly I believe it can be seen in the way that ‘’eccentric’’ gives meaning to a person – making him or her stand out from all the rest, unusual.

Mr. Jones is certainly of that nature. Go see him!