A shift from night to day in menswear

Meeting up with Liza Koifman and Tomas Overtoom , the key figures of ONTFRONT based in Amterdam, has never been difficult. Apart from designing their menswear they also used to celebrate the arts in a wider context in nightlife before starting their fashion label half a decade ago. Since then their star has been rising and they are also doing well  in Asia.
Apart from catwalks in Europe they showed in Hongkong (where part of their production is done) and Shanghai, where post-communist times in China brought forth an industrious generation of individuals that wanted to come across as tough and luxurious. And that audience is embracing Ontfront for its slick look and European roots.

Looking back into the future

Liza  studied Costume Design at the National Film Academy in Amsterdam. Besides designing costumes for film and video productions after graduation, she could not contain her urges for individual creative expression, which were erupting within her.

Although the couple is looking back in time and have chosen dandy-like styled characters of the 1940’s or knights for inspiration, the designs and materials are distinctly 21st century. Their interest lies in building a brand for men of this century and not one of yesterday. It also explains their use of big city night scenes and car-race backdrops in their visual presentations.

Alexander Moust:
How did the two of you really meet?

Tomas :
Oh..can I tell this in public? ( Looks at Liza and she nods)
Around 2004 I was doing a lot of DJ-ing and Liza was a professional dancer in nightclubs.  I asked her to come to one of my  dance events in a large discotheque. Then I received a text back: ”check the floor beneath you – I am dancing in the centre of the stage”. I was immediately sold on her !
So nightlife brought us together at a time when mostly young artists met up and shared dance, music… and fashion. Since then we’ve been together and shared our dream; making clothes for our generation.

Liza:
I was attending film school designing clothing and I realised that not so many things were there for men, sd opposed to the possibilities I had for dressing women. Designs, colours and mix-match options for men were relatively non-existent.

Tomas: Our creative generation of photographers and creative directors did not have the possibility to dress and impress in their new careers.
Items which went well with what they stood for (that they could also afford) was something we wanted to provide. .

The first thing we did was to make a crossover between a colbert and a hoody with a pin stripe. We made 1000 items of a single jacket in black and white, went to London, did fairs and started selling that single item to shops.

T+L
Yeah, we also promote ourselves as autodidacts or self-made. We are really closer to clothing design in a wider perspective instead of staying in a more conceptual dreamlike fashion thing. We think in terms of products that have to get to a market made for a certain target group. But at the same time our clothing is being made and produced with a lot of precision and dedication to detail, without these items being too expensive to buy for our target groups.

Then for our next collection we were inspired by the Zazous, artists living in the 1940’s influenced by New Soul,  Jazz and Bebop. Back then men were expressing themselves – also politically-through what they wore apart from the music and art they made. For our shows and lookbooks we tended to ask actors, directors and dancers to participate.
As it is our aim to create fashion for men that is affordable we also want people to express their identity on the street today.

AM
Seen on and inspired by the streets. Hence the term sidewalk tailoring – correct?

Liza:
Yes – I always design directly on my computer. I skip the stages of drawing on paper and when we are traveling my ideas immediately go into a designing program on my laptop. My canvas is the male human body and men are interesting creatures.  I insist that modern men are ready for innovation. Every day I try to crack their secret code and I think I’m getting there!

AM
Who was important for you in the designer’s field as a source of inspiration?

T+L
Tom Ford e.g. made us aware that one can focus on a single idea and really work that out instead of too much layering (as is much in use in for example here in the Netherlands). For example, our fall/winter 2010-11 collection is called Shift Gear and is inspired by sleek sports cars like Lamborghini and Spyker.

Will the two of you ever go back to nightlife to DJ and dance again professionally?

T+L
No that is inconceivable; Ontfront really stands for everything we did before and our brand, distribution, design and shop are a full time daytime occupation now. It is of major importantance to fully focus and work on our collections. Next year in the spring we will be showing in Japan. That is a challenge! 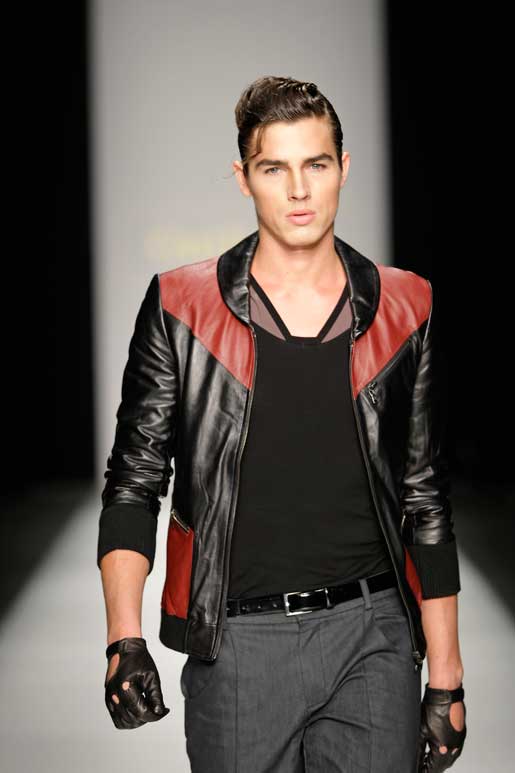