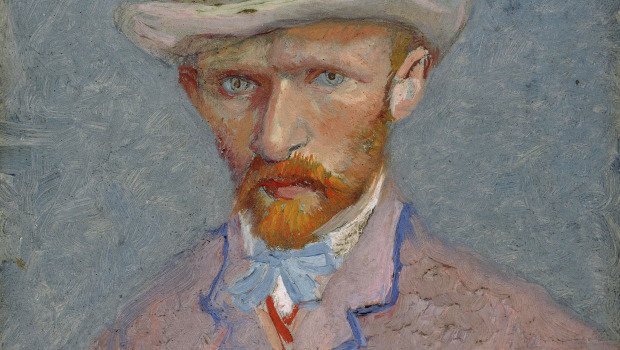 Was Vincent van Gogh first and foremost an impulsive genius? How well have Van Gogh’s colours withstood the ravages of time? And did Van Gogh make a painting of his brother Theo after all? To start with the case of ‘Vincent/Theo’,  according to prevailing opinion, Vincent van Gogh (1853-1890) never painted his brother Theo, his confidant and staunchest ally.  But the two brothers looked quite similar. Now, the Van Gogh Museum’s senior research Louis van Tilborgh is convinced that one of the many ‘self-portraits’ by Vincent van Gogh is in fact a portrait of his brother Theo. This conclusion is based on a number of striking differences between Theo’s en Vincent’s features. Theo’s portrait, made in 1887, shows a man with shaved cheeks. Theo’s beard is not ‘red’ like Vincent’s, but more ochre. On top of that, this man’s ear has a fine rounded shell, unlike Vincent’s but like Theo’s. Vincent did not overlook his devoted brother after all.

The Van Gogh Museum’s summer exhibition Van Gogh in Antwerp and Paris: New perspectives puts many more intriguing questions to the test. The exhibition is on show until 18 September 2011.

Once you start to ask questions, you may sometimes be surprised by the answers. Familiar works of art may appear in a new light: such discoveries help to keep one’s gaze sharp and fresh. That is one reason why the Van Gogh Museum continuously researches its own collection. The exhibition draws on the findings of an exhaustive study of almost 100 paintings by Van Gogh in his Antwerp and Paris period.  Less was known about this period as Van Gogh stopped writing letters to Theo. After all, in Paris, the brothers lived together for two years. This gap in correspondence, made research all the more interesting.

A close look at 54 works, on show in the museum, reveals Van Gogh’s spectacular artistic development between 1885 and 1888. Within a brief space of time, he transformed himself from a realist painter with a limited, sombre palette into a modernist who expressed himself in brazen brushstrokes and bright, vivid colours. However, was Vincent van Gogh first and foremost an impulsive genius? He supposedly set to work spontaneously, without planning and without any preconceived notions. Beneath the surface of the paint, a different story emerges, one that frequently involved meticulous preparation. But certain factors were beyond Van Gogh’s control. In Antwerp and Paris he used a new assortment of tube paints in vivid colours. Unfortunately, he did not realise that some paints were less durable than others, and would fade with time. We are now able to reconstruct the ways in which the paintings have changed, and are possibly still changing today.

The museum’s research team also made new discoveries regarding the dating of Van Gogh’s work. For instance, the assumption that the painting of Van Gogh’s worn labourer’s shoes dates from his early period in Nuenen proves to be incorrect. It has been discovered that this painting was produced much later, because it was painted over an earlier work, depicting a view of Paris. In addition, it turns out that the park that Van Gogh depicted in his well-known The garden with lovers was not in the village of Asnières, as was once believed, but in Montmartre, in Paris.  And the bird flying in Wheatfield with a lark, turns out to be a partridge…

The findings of this research by Louis van Tilborgh and Ella Hendriks, with contributions by Margriet van Eikema Hommes and Monique Hageman, are published in a collection catalogue extending to over 600 pages: Vincent van Gogh, Paintings 2. Antwerp & Paris, 1885-1888.

The Van Gogh Museum in Amsterdam takes care of, manages and preserves the largest collection of works and letters by Vincent van Gogh in the world. The collection includes some of the public’s favourite paintings, such as The potato eaters, Sunflowers, and Almond blossom. With high-profile exhibitions, the museum also seeks to define Van Gogh’s context, by paying particular attention to his contemporaries, precursors and followers. The Van Gogh Museum is also a research centre with a formidable international reputation in the academic world. It welcomes one and a half million visitors each year, making it the most popular museum in the Netherlands, and one of the twenty-five most visited museums in the world.