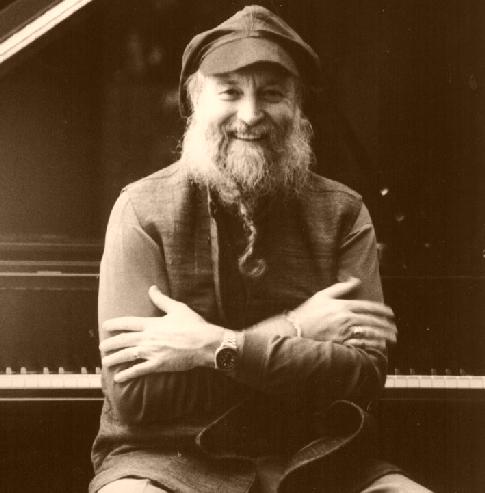 Born June 24 (The Day of the Blissful Wizard)

Terry Riley’s musical approach is very similar to that of Johann
Sebastian Bach in one important respect. As Bach took the strands
of Italian, French and German Baroque along with other elements
of English and continental music and synthesized them in his
own compositions, so Riley did the same with the major trends of
world music, incorporating Chinese, Japanese, Javanese, Indian,
European Classical, Jazz, pop, electronic and many others into his
rich compositional tapestry. This interweaving of musical styles and
techniques allows us to refer to Riley as the Bach of the later 20th and
early 21st centuries.

Terry Riley burst on the world musical scene with his seminal
composition In C, a composition built on a single piano pulse of the
note C around which small musical units were added, each unit
being continuously repeated by a given instrument until the entire
composition was realized. The release of this piece on Columbia
Records was for the general public the beginning of what came later
to be called Minimal Music. Riley’s friends and associates LaMonte
Young and Marian Zazeela were also active in this area, along with
Steve Reich who was Riley’s student at Mills College in Oakland,
California. Terry Riley is a true Californian, born and bred in Colfax
and still living today in the Sierra foothills.

As a master musician, Riley’s varied styles are both compositional
and improvisational, much as Bach’s also were. Both composers
spent many hours improvising at the keyboard, their later
compositional ideas often emerging from these explorations. To this
day Riley still performs as an improvisational artist while publishing
and recording his written compositions as well. Frequently he is
commissioned to write works for existing ensembles, such as the
Kronos Quartet who have premiered many of Riley’s compositions
on recordings and in live performance. Riley’s most recent endeavor
with them was The Cusp of Magic, written in celebration of the

composer’s 70th birthday, drawing its title from The Secret Language
of Birthdays by his close friend Gary Goldschneider, to whom the
work is dedicated. Two other commissions of many he has written
that are particularly worthy of mention were those of Carnegie Hall
in celebration of their 100th anniversary and NASA who provided
Riley with sounds recorded in outer space as the basis for a new
composition.

As a teacher and inspirational force, Terry Riley has fostered and
encouraged not only the development of new music in America
but of the emergence of many young composers and musicians.
He himself was most musically indebted to the influence of Indian
master singer Pandit Pran Nath, who was his teacher of Indian ragas.
To this day, Terry Riley still awakens early and sings morning ragas,
accompanying himself on a harmonium or by computer generated
tones programmed on a laptop that he carries with him on his many
overseas tours.