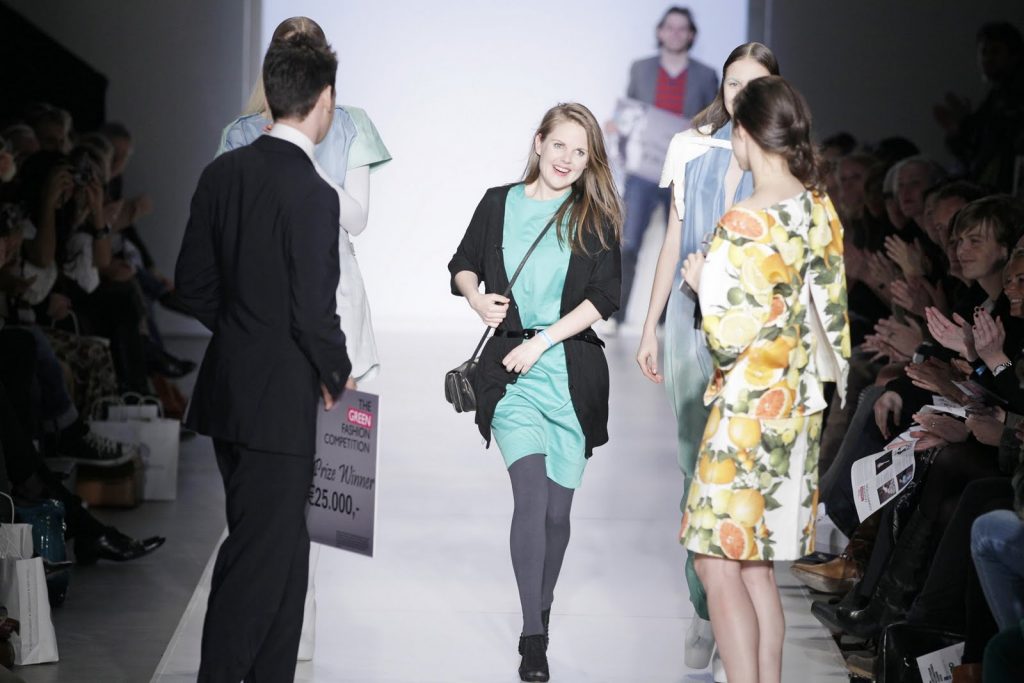 The Launch
During the 15th edition of AIFW, taking place from 13th till 17th of July, Saturday 16th will focus on green fashion (at19h00). International topmodel and ambassador Lonneke Engel will officially open the second edition of The Green Fashion Competition in a unique multimedia setting. Second prize winner of the first edition of TGFC, OAT Shoes, will present their new product line: The Limited Skin Collection in honor of the competition. After winning the second prize, the first ‘Virgin Collection’ by OAT Shoes found its way to stores in the Netherlands and Belgium and is receiving enthusiastic responses worldwide as the ‘blooming shoes from Amsterdam’.

Competition Ambassador Lonneke Engel
Throughout the competition each submission will be judged by a professional jury. Lonneke Engel (international super-model and founder of Organice Your Life®) is one of the judges and is also the ambassador of The Green Fashion Competition. For the second season of TGFC Lonneke modelled unique ‘green fashion’ garments in a stunning series with photographer Jouke Bos, which can exclusively be used for TGFC publications. In the attached campaign image Lonneke is featured wearing Elsien Gringhuis.

Participation
Unlike the first edition, the competition has currently been divided into two categories. The first category is for fashion entrepreneurs who are already working in the fashion industry and who aspire to lift their company to a higher plane in the (international) market. The first prize in this category is € 25.000, -. Young fashion creatives and graduates who are starting out, can register for the second category with first prize €
15.000, -. From July 16th until September 30th 2011, anyone with a vision of ‘the future of fashion’ can register either as an individual or as a team. Participation is open for Dutch as well as international applicants. Conditions and more information (concerning participation in) the competition can be found at:

The first season of The Green Fashion Competition was launched in July 2010 with over 180 entries, from all over the world. After the first selection, 40 remaining participants were invited to participate in a series of workshops. From these 40 finalists the jury selected eight who had a chance to further develop their business plan and present their designs during the “Grand Finale” at AIFW in January 2011. Dutch designer Elsien Gringhuis won the first prize of € 25,000, – and OAT (Shoes that Bloom) came in second and won € 15,000.
Elsien Gringhuis: “I’ve learned a lot from The Green Fashion Competition and the workshops that were held there. That in itself I found to be fantastic. The award itself is a huge boost for my business and gives me the opportunity to launch the production. This is a difficult issue for any designer without capital.”