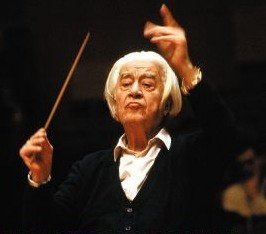 Born June 28 (The Day of Emotional Stimulation)
Born 10 years apart on the same day, the Romanian conductor Sergiu Celibidache  and the American composer Richard Rodgers, although classical and popular musicians, respectively, both had the ability to move their audiences to tears as well as bring them to the heights of musical ecstasy and Emotional Stimulation in live performances of their work.
Rodgers was certainly the better known of the two, largely through his musicals written with the lyricist Oscar Hammerstein (Oklahoma!, The King and I, Carousel, South Pacific and The Sound of Music) and his songs written with lyricist Lorenz Hart. Celibidache, although co-conductor of the Berlin Philharmonic after WWII with Wilhelm Fürtwängler and principal conductor of his own orchestra the Munich Philharmonic for many years, was considered very esoteric and unusual in his approach to conducting and so was denied the fame of Herbert von Karajan who was chosen over Celibidache to lead the Berlin Philharmonic to its greatest heights. For example, Celibidache refused to record, basing his entire musical philosophy on live performance, where he felt music belonged. Although many recordings were made of his performances and even films of his rehearsals, he never would have agreed to make the many hundreds of studio recordings for DGG that Von Karajan produced over the years with the Berlin orchestra. Celibidache was the founder of a whole new orchestral approach, featuring the Zen principle that only in attending a live performance could the listener be transformed and taken to the peak of musical expression. Celibidache’s rehearsals show him to be a meticulous and demanding craftsman, expecting his musicians to understand and explore every nuance of every phrase and relate it to the whole composition. In this respect he was like the Russian conductor of the Leningrad Symphony Yevgeny Mavrinsky, as a comparison of their rehearsal sessions will show. Both were teachers, imparting their musical wisdom to their players in a firm but loving, fatherly manner.

Composer Richard Rodgers was not a performing musician but, similar to Celibidache, was extremely demanding of himself and aimed to produce artistic work of the highest quality. He can be said to have been the most important composer of successful musical comedies in the history of the American stage. The songs from these works as well as individual songs from earlier musicals that were not so successful were adopted as the main improvisational vehicles of many American jazz musicians.  My Funny Valentine, Lady is a Tramp, Where or When, and of course John Coltrane’s signature My Favorite Things from The Sound of Music. Interestingly enough Coltrane discovered modal elements embedded within the melody of My Favorite Things  that led him away from running up and down more limiting chord changes and blues patterns, leaving him free to reach new heights of ecstatic expression. Perhaps, in this single respect, the four note theme of My Favorite Things (based on the tones E-B-F#) already contained the spiritual seed which was to flower later in Coltrane’s music and through Coltrane to bring Richard Rodgers’ and Sergiu Celibidache’s musical approach very close, all three employing  similar transcendental and Zen-like musical methods.