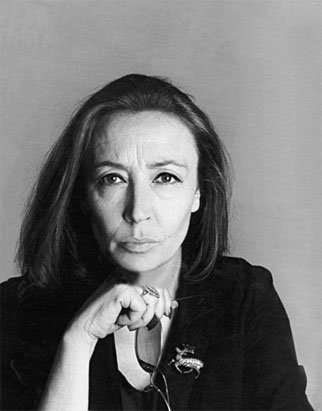 Mainly a journalist, Oriana Fallaci achieved her greatest fame through books that were not primarily literary documents. A Man, her best-known work, is really a memoir written about the Greek political activist Alexandros Panagoulis. Her other important books, such as The Rage and the Pride were newspaper articles which her publisher turned into books.

Fallaci’s highly controversial career encourages a discussion about the difference between a journalist and a writer, if there really is one. Although there have been many journalists who never aspired to be book authors and certainly many novelists who were not at all interested in writing journalism, there have been a significant number who have done both, like Hemingway and Orwell, to cite only two. A member of the Italian Resistance during WWII Fallaci grew up in the heat of polemical political activity assisting her father who was head of the underground resistance in Florence, and remained a controversial figure her whole life long. Obsessed with politics and strongly opinionated in her views on this subject, she sought out the major world leaders and did many hundreds of published interviews of them. Her interviews of Ayatollah Khomeni (during which she ripped off the chardor she was required to wear to do the interview), that with Muhammad Ali (when she threw her microphone in his face after he belched) and the Henry Kissinger interview (which he described as one of the worst experiences of his life) were particularly noteworthy.

Certainly a journalist has enough to write about. Combined with the ability to research subjects thoroughly, it would seem to be a natural process to evolve into being a writer of fiction or non-fiction, yet many writers insist on maintaining a strict separation between being a journalist or a novelist, for example. Furthermore, most critics and even writers themselves undeniably accord the writing of imaginative works of high literary merit a greater value than writing articles for magazines and newspapers. Thus William Faulkner’s work is regarded as high art, while local or even internationally syndicated journalists’ articles are not.

No matter what one’s opinions are on this subject, Oriana Fallaci certainly deserves to be accorded the title of writer as well as that of journalist, with the quality of her writing equal to that of Orwell and Hemingway. However, her life itself was probably the most fascinating and creative endeavor in which she invested her time and energy. Perhaps an autobiography would have been her most supreme literary creation, had she left one behind for us to read.