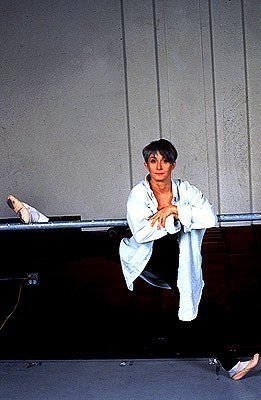 Born July 1 (The Day of Emancipation)

This American choreographer and dancer whose earliest years were spent as a mid-Western farm girl prefers to simply refer to her creations as “dances.” She studied with the modern dance pioneers Martha Graham and Merce Cunningham, becoming part of and an important leader in a movement that deliberately broke down the distinctions between classical ballet and modern dance, requiring that the members of her company be proficient in both. She has created works for the Joffrey Ballet, New York City Ballet, and most of the other leading ballet companies in the world. In the course of doing so, she not only choreographed classical music as Maurice Bejart did almost exclusively, but created dances to songs by Billy Joel, Frank Sinatra, Bob Dylan and others. This combined with her work for TV, films such as Milos Forman’s  Amadeus, and her work with other pop performers led to her being called the creator of “crossover ballet.”

This raises the whole question of what crossover in the arts consists of, since so many of the genre barriers have been sorely tested, in some cases resulting in a process of “fusion”, another term frequently used for a melding of the arts. In the last century the term crossover had several meanings. In an age of severe compartmentalization which is still hanging around today (whether relevant or not) the sellers of long-playing vinyl records, then CD’s and now DVD’s had to literally know in which bin to display their wares. Their customers often required it, so as to know where to look. We learned to expect this musical segregation in stores that were and still are divided up into classical, pop, and jazz, for example, with pop further subdivided into rhythm and blues, soul, disco, rap, heavy metal, etc. while classical might be divided into opera, chamber music, symphonic, solo (which would be subdivided into piano, guitar, and other solo instruments).  One meaning of crossover in terms of sales and marketing  would mean putting a classical album in the pop bin, or a jazz album in the classical bin. Often albums were listed or displayed under the name of the artist, and a given artist might appear in several bins at one time or over a period of time.

Crossover came to be used in terms of an artist as well, as in the case of Twyla Tharp. Her work was considered crossover not only because it broke down the distinction between ballet and modern dance in creating a highly personal dance language but also because she choreographed pop songs as well as classical music, often scheduling them on the same program. Further, not only was there crossover music, crossover ballet, and a crossover artist, but also the creation of a crossover audience, who in one evening might listen to works from pop, jazz and classical sources while watching a Tharp dance creation that melded many diverse dance elements in itself.

The term crossover is only used a bit less today because even artistic genres themselves are being increasingly redefined and broken down. Thus, not only do opera singers like Jose Carreras and Kiri Te Kanawa sing songs from West Side Story, and “crossover artists” like Sarah Brightman sing pop and show tunes with a classically trained voice, but the strict distinction between opera, musical, musical comedy and operetta themselves have also blurred. It is no longer so important or even possible to categorize a work like George Gershwin’s Porgy and Bess as either an opera or a musical, as evidenced by the fact that it is regularly performed in both opera houses and musical theaters, enjoyed by opera and classical music devotees and the general public alike.

With the increasing breakdown of strict distinctions between genres and even between the arts themselves, visionary artists like Twyla Tharp have paved the way for the creation of new art forms. Her work with filmmakers, TV producers, musicians and other dance companies hearkens back historically to the collaboration of Picasso, Stravinsky, Diaghilev and Nijinsky in Paris at the beginning of the twentieth century. Ultimately the terms and practices of fusion, crossover, mixed media, synthesis, and multiple genre settings all follow the lead of that early pioneer composer-poet-librettist-philosopher-conductor Richard Wagner, who created the Gesamtkunstwerk (total art work) in the nineteenth century which fused the arts in his visionary operas, ultimately  requiring that new opera houses be built to accommodate to his grand, artistic visions.