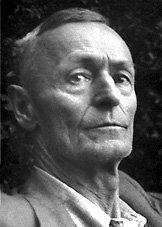 Born July 2 (The Day of the Disconnected Unconscious)

When Herman Hesse died in 1962 he could not have realized how important his books would become for a whole generation of young  people growing up only a few years later. In some ways the true prophet of the 1960’s and the revolutionary spirit of the times that revived a big interest in spirituality, anti-war sentiment, expressions of higher consciousness, and social protest, Hesse’s books were widely read and discussed during these tumultuous years.

In novels like Demian, Steppenwolf, Siddhartha, Narcissus and Goldmund, and his final masterpiece The Glass Bead Game, his frequently tortured characters seek the path of inner personal exploration and raised consciousness, struggling to make the vital connection between the interior and exterior worlds, to link the unconscious and conscious (or even hyper-conscious) minds, striving to understand the reasons for existence itself. The power of Hesse’s writing derives from the fact that he approached the most philosophical and complex subjects in a way that was accessible to the average reader, avoiding any real intellectualization. Hesse himself never attended university, was self-taught and learned about books by working in a bookstore where he could satisfy his great love of reading. Such a background is similar to many other self-taught writers and artists, perhaps most closely paralleled in our times by Quentin Tarentino, a high-school dropout who worked in a video store and later went on to become one of our foremost film directors.

Most of Hesse’s books are short, certainly compared to the mammoth works of Tolstoy and Thomas Mann, but grip the reader with great intensity through their synthesis of fascinating characters, interesting plots, and above all the themes and philosophical visions that are skillfully interwoven in them. Some would consider his work more philosophical, others more literary, although he did receive the Nobel Prize in literature. True, when reading works like Flaubert’s Madame Bovary we feel we are reading pure literature while the works of George Orwell are overtly political, Dickens and Zola socially activist, Sartre and Hesse philosophical, but giving such direction to the plot of a novel or play does not really diminish its literary significance, as long as its artistry is kept at a high level. Even in cases that appear pornographic, and written only to sexually excite the reader, the works of Henry Miller, Anais Nin and Charles Bukowski clearly show that “pornography” can also achieve the status of great literature.