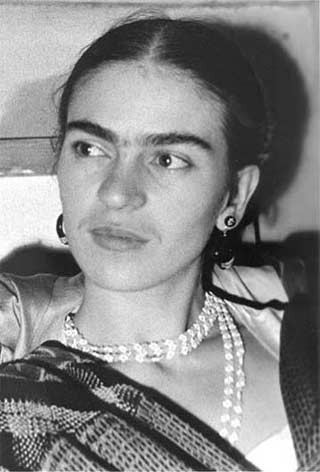 Frida Kahlo’s traumatic life is reflected in her paintings, primarily consisting of portraits and self-portraits. Her dark, gloomy thoughts were reflected in some of her own self-images but so were the joys she experienced, which are clearly expressed in her use of vivid colors. Kahlo herself recognized and commented on her obsession with her own inner life.  In addition to having contracted polio when young (which left her right leg permanently disfigured) and having possibly been born with spina bifida, she was involved in adult life in a streetcar crash which broke many bones, pierced her abdomen, and so traumatized her both physically and psychologically that she never really recovered, also being in almost constant pain and undergoing endless surgical procedures.

Her energies were principally devoted to painting, revolutionary activities in her native Mexico, and her marriage with Diego Rivera. Frida’s paintings show many influences and styles including art nouveau, Renaissance, cubist, expressionist and primitive. The soulful, expressive qualities of her work clearly stamp it as uniquely hers, rendered as much or more from the inside rather than being solely outward representations. Some of her portraits are surprisingly realistic, lifelike, while others, done with elongated Modigliani-like necks, show more expressionistic qualities, but her own personal style is always evident.

The torture of her catastrophic illnesses, accidents and surgical operations were mirrored in her inner emotional life, particularly in her tumultuous love affairs and two marriages with Rivera. The bisexual Kahlo had a free, open marriage with him that included a probable affair with the Russian revolutionary Leon Trotsky, who lived with them for a while.

Although Kahlo’s paintings have been shown around the world, in her own lifetime she had only one show in her native land. Muralist and painter Diego Rivera’s public persona and work overshadowed Frida’s, which was undoubtedly part of the many difficulties that beset their highly unusual relationship.

Born on the Day of Magnetic Desire in the Week of the Unconventional, Frida Kahlo lived life to its fullest despite having the cards so clearly stacked against her from the outset. She became a symbol for women’s liberation after her death and has been featured in a film based on her life entitled Frida. It is impossible to separate Kahlo’s life from her paintings, so intimate are they and unambiguous in the portrayal of her inner struggles. The acute physical and emotional pain she constantly suffered accompany all of her work, but never interfere with the pure creative process that produced her masterworks. Perhaps her work was best described by one Mexican critic who observed: “Her paintings are her biography.”