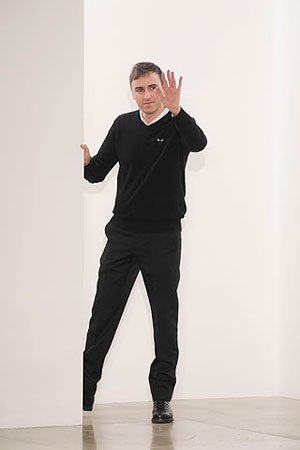 One of the indisputable individual kings of menswear.

How can anyone actually get a clear picture of Raf Simons, designer and artistic head of the brand Jil Sander for the last 6 years and also the head of his own label: Raf by Raf Simons?

”Not me but the collection has to be in the picture”

Raf Simons was born in 1968, growing up outside of Antwerp in Neerpelt, close to the borders of Holland and Germany.
Raf Simons never took classes in fashion but finished his studies in industrial design (citing fashion as a major point of interest) in Genk, Belgium and did an internship at the company of the Antwerp fashion icon Walter van Beirendonck instead while he was still in school. After some tedious times working within industrial design he realised that this occupation would never suit his personality. Fashion on the other hand thrilled him far more.

Raf Simons: Yes, I had an internship with Walter van Beirendonck. In the first period he made a collection called “Fashion is Dead.” I’ll never forget that. He made a newspaper, which was also fake: a front page with big headlines, a horoscope, perfume ads. But all this stuff had to be made, so I had to make him a perfume bottle or a mask for example. We got along really well, and so after a couple of months I could kind of work with him in the collection.

Even if he was from another generation than me, we had a really strong creative click. And he took me to Paris. He had a presentation of clothes where the furniture and everything was specially done, and that’s what I had to create. Around that time the Antwerp scene designers, the six from Antwerp, started showing.  I remember, when I saw Martin Margiela’s show I already thought: “I’m wrong. I don’t want to do industrial design.”

Love and hate with fashion

He would probably have started another studies in fashion if Linda Loppa- then head of the Antwerp Royal Fashion Academy- had not advised him to gain experience by joining different fashion professionals. “Raf was already so determined, ” Loppa says. “I was afraid after four years we would destroy his identity.” She introduced Simons to her father, a prominent Belgian tailor, and Simons locked himself in his house: several months later he emerged with his first collection.

Raf Simons: I come from a white trash family. My mom went out for work when she was 15. My dad went into the army when he was 17. I was playing on a farm with cows, sheep and chickens and a bunch of children; that was it. My mom and dad really wanted me to do something with my education at a young age: Latin, Greek, mathematics — theoretical stuff. At 17 I felt like I really wanted to concentrate on something more creative. But I wasn’t aware that an art academy or a fashion academy existed. I was in a stupid little village. There was no culture. There was nothing.

Inspired by youth cultures of past and present times, Raf Simons made his first collection in autumn / winter in 1995. Traits of streetculture, English schoolboys, Bauhaus, punk or even music by Kraftwerk formed his silhouettes and using simple streetcasting of non-professionals as a new way of creating fashionshows for men, made him in no time into a visionary fashiondesigner these years.

Raf Simons: I only work with non-professional models, people I cast myself, usually not related to the fashion world themselves. They react differently – open and fresh. They make me think more and they inspire me more.

Surprisingly he stirred the press once again a little later in 1999 when he shut down his company for a while that had risen to fame so quickly in order to restructure his mind and business. Having a love-hate  relationship with the fashion domain, with its tight schedules and deadlines, was never really his thing and still isn’ t today.

Today as the artistic head of Jil Sander for the last 6 six years, he moves between Milan and Antwerp where he lives. Little private life is left for himself.

“My goal is true independence, both in my work and my mind.”

The most important message Raf Simons has is: pride in individuality. His clothes are both inspired by and designed for confident outsiders. His references to youth movements (punk, goth, mod, etc.) are not meant to be retro; instead Simons tries to translate their energy and determination into modern statements about mental independence.

Raf Simons: My favorite item in clothing is the white all-over printed bomber, made in collaboration with Peter de Potter, inspired by an i-D photo from Nigel Shafran and Melanie Ward and by a self portrait of Ashley Bickerton. I am extremely attracted to other individuals’ creativity and worlds and vice-versa. These collaborations result in the most memorable moments and creations for me. Creative freedom may never be compromised, otherwise I’d stop.

Perhaps more than any label today, he maintains a commitment to repressed youth. Not the youthful vigor fetishized by biceps-and-pectorals, but real youth, in all its awkward menace. Simons’ clothes contain the psychic spark of the ignored, the revolutionary potential that builds up during the isolation of adolescence.

Sound and vision and.. fashion

Although they are impeccably cut and created with love and care, clothes are not at the core of Simons’ universe. More important are attitudes,  moods and statements. That’s why music, art, performance, image and words have an important role in the whole package. Together with clothes, those elements sum up, or rather, clarify, the kind of world Raf Simons wants to project. In an attempt to examine today’s men’s and boys’ psyches, he takes his inspiration from the rebellion of past and present youth cultures and blends this with notions of tradition and roots.

Simons is influenced by many different artists and art forms, particularly the films of Larry Clark:

Raf Simons: I started my thing not because I wanted to be a designer who was going to sell all over the world in the fashion stores. I just wanted to bring out some kind of language which was meant for me and my environment which didn’t feel comfortable with the kind of look that we got presented. And we were interested in fashion — we were following it — but  something was missing. And that’s how I started doing it. I think that’s also why I started focusing on Larry [Clark]’s work so much. It’s not so staged. It’s real.

In these films we come across the lives of teenagers who experiment with sex, drugs, relationships…All filmed in a pure and natural but striking manner. ‘’Ken Park’’ is a must see. It is  ‘’ín your face’’ from a filmic world made from very well designed plots of real life situations with a twist. Raf Simons could have lived in them.

-In 1999 he designed the men’s line for the Italian Company Ruffo Research. Following his S/S 2000 collection, he published a book of images called Isolated Heroes that acclaimed photographer David Sims made of his work. For the February 2001 issue of British style bible i-D, Raf Simons was invited as a special guest editor.

-With Francesco Bonami (Museum of Modern Art, Chicago), Raf Simons curated the exhibition ‘The Fourth Sex’ in Florence, Italy (January 2003). He also curated the exhibition Guides By Heroes in Hasselt, Belgium, later that year where he showed his mental world, but let the original protagonists shine in their own right.

Raf Simons is also still the artistic head of Jil Sander after 6 intensive years, but as his 3 year contract will come to a close this summer, we’ll just have to wait for what his next move will be.

Raf Simons: Within my present position at Jil Sander I have enormous freedom and I enjoy working with the strong team and all the know-how of the house. Besides it helps me to become stronger financially to further develop my own label. Maybe when I finish at Jil Sander, a women’s line within my own label could be a serious option too.

I dream of a house in the Provence where I could do some pottery, just for fun. I love my craft but when the time is right, it will be quite easy for me to leave fashion for what it is and live an entirely different life.