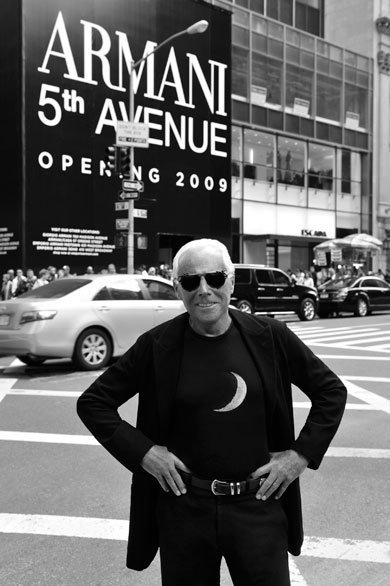 Born July 11 (The Day of the Unsolicited Opinion)

Born on July 11th in Piacenza, Italy, Giorgio Armani became one of the most famous and fortunate fashion designers in no more than 25 years and is still expanding his imperium worldwide with stores around the entire globe topping annual turnover of $1.6 billion and a personal fortune of $7 billion as of 2011.

Much or too much has been said about the designer that until today has lead a life of hard work and passion for beauty both within his craft in which he was self taught through practice in daily life and trade. Combined with a fine instinct for commerce and finding ways to accommodate mass audiences with affordable luxury with a clean cut, Armani is still – even today at the age of 77 – one of the milestones and trendsetters of fashion and apparel design in the last quarter of the  20th  century on a global scale. Armani could be seen as the Alfa Romeo brand owner among fashion designers. His flair, speed of life and slim but quality breathing attire has attracted both business men en women as well as ‘’the man in the street’’. I guess they all share the same dreams.

A big reason for him to stand out is probably that apart from being just as accessible to a large audience with his Emporio Armani lines, the brand name just sounds ‘’ royal’’ to many and maybe because his use of the eagles silhouette in the brand’s logo also refers to both the Roman empire (emporio) as well as the eagle of the American dollar bill. Armani stands for power- and the term powerdressing could very well fit to his personal approach of dressing; slick with a twist of flair and nonchalance but above all stylishly macho without showing off. His appearance is far more masculine than many of the haute couture designers at the famous  French lines have.

This could account for the appealing nature of the brand to a mass audience apart from being known for its slick cuts, which is basically a trademark for Italian design in a far wider context. Be it cars, clothing, or food, Italians like abundance, or even opulence, but in best cases always with a taste of perfection, inherited throughout the ages from so many artworks and artists performing and living in la bella Italia. This – I believe – has truly inspired generations after him as the man in the street with a twist (in whatever direction that twist can turn to) is still hot today. Besides:‘’Made in Italy’’ is a  trademark that many people around the world would first assign to Armani’s company that was founded in 1975 by Giorgio Armani and his life and business partner, Sergio Galeotti.

In the mid-1960s, Armani moved to the Nino Cerutti company, for which he designed menswear. His skills were in demand, and for the next decade, while continuing to work for Cerutti, Armani also freelanced, contributing designs to as many as ten manufacturers at a time. In the late 1960s, Armani met Sergio Galeotti, an architectural draftsman, which marked the beginning of a personal and professional relationship that lasted for many years. In 1973 Galeotti persuaded him to open a design office in Milan, at 37 corso Venezia. This led to a period of extensive collaboration, during which Armani worked as a freelance designer for a number of fashion houses, including Allegri, Bagutta, Hilton, Sicons, Gibò, Montedoro, and Tendresse. The international press was quick to acknowledge Armani’s importance following the runway shows at the Sala Bianca in the Pitti Palace in Florence. The experience provided Armani with an opportunity to develop his own style in new ways. He was now ready to devote his energy to his own label, and in 1975 he founded Giorgio Armani Spa in Milan with his friend Galeotti. In October of that same year he presented his first collection of men’s ready-to-wear for Spring and Summer 1976 under his own name. He also produced a women’s line for the same season.

Whatever way you put it, expansion in all directions sure enough was and is one of the many successful ways Giorgio never had trouble with finding and pursuing. Both in his professional career and in his private life or even his bi-sexual preferences all options were to be closely examined by him personally.

In 1979, after founding the Giorgio Armani Corporation, Armani began producing for the United States and introduced the Mani line for men and women. The label became one of the leading names in international fashion with the introduction of several new product lines, including G. A. Le Collezioni, Giorgio Armani Underwear and Swimwear, and Giorgio Armani Accessories. In the early 1980s the company signed an important agreement with L’Oréal to create perfumes and introduced the Armani Junior, Armani Jeans, and Emporio Armani lines, followed in 1982 by the introduction of Emporio Underwear, Swimwear, and Accessories. A new store was opened in Milan for the Emporio line, followed by the first Giorgio Armani boutique. Armani’s concern for the end user culminated in the development of a more youthful product with the same level of stylistic quality as his high-end line, but at a more accessible price.

Armani also felt that a relationship with the cinema was essential, both for promotional reasons and for the stimulus to creativity. He designed the costumes for American gigolo (1980), the success of which led to a long-term collaboration with the world of film. Armani designed costumes for more than one hundred films, one of the most important of which was The Untouchables (1987). If he could start his career all over again, Armani has said he would become a director of plays and films.