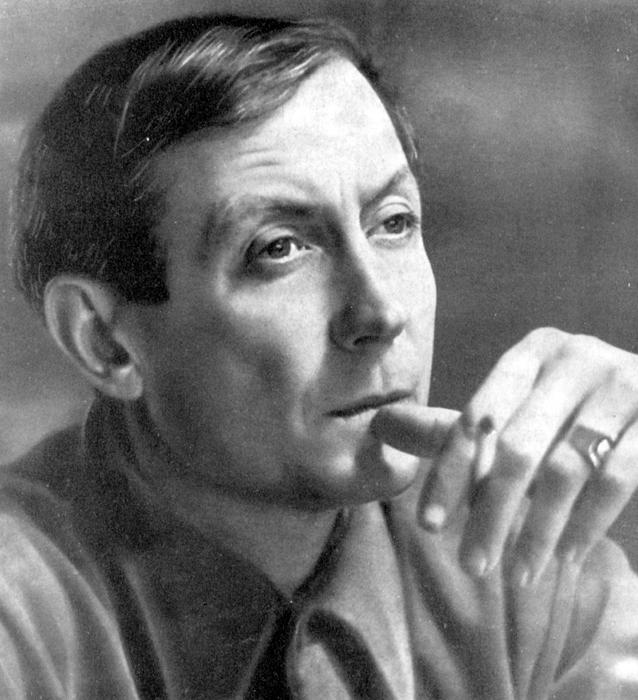 Yevgeny Yevtushenko
Born July 18 (The Day of Conviction)
The controversial Russian poet, Yevgeny Yevtushenko, has aroused a storm of controversy in his life. International in scope, he came out in support of other poets who in return supported him when attacked. Yevtushenko also emerged as a filmmaker-actor and for some years now has spent a good deal of time lecturing around the world.
He first well-known poem, Zima Junction, written in 1946, aroused a storm of criticism in Russia and engendered support among American poets.  In 1961, his most famous poem, Babi Yar was written. This poem was an indictment of the Soviet system, dealing with the Holocaust and Soviet persecution of the Russian Jews. The foremost Soviet composer, Dmitri Shostakovitch, inspired by this poem, composed his 13th symphony, and subtitled it Babi Yar as a tribute to Yevtushenko. The poem was not permitted to be published for 23 years in the Soviet Union but managed to get leaked out and read abroad, as well as secretly in Russia itself.  Yevtushenko was branded a dissident poet, one who expressed anti-government thoughts in his work. Having managed to survive the Soviet times, Yevtushenko achieved great popularity through his public readings and lectures, continuing to travel between Russia, Europe and the United States and to hold academic positions at American Universities.
Yevtushenko’s career places in bold relief the question of whether poetry should be regarded as high art, kept pure for the literati who alone can understand its complexities, or whether it should venture into political and popular realms, to become appreciated by the general public. It could be argued that the cultural contributions of more intellectual, esoteric, symbolist poets such as T.S. Eliot, Ezra Pound, Stephane Mallarme, Paul Valery and W.B. Yeats, although highly significant literarily,  have only reached a very small segment of the population. Indeed it could even be argued that poetry is largely unnecessary or superfluous to a culture, much like pure Freudian psychoanalysis or Zen Buddhism, in terms of the small  number of people they reach in any society. In contrast, more popular poets, such as the beats Allen Ginsburg, Jack Kerouac, Lawrence Ferlingetti, and the highly popular Rod McKuen  were active in bringing the public recitations and readings of their works directly to the public, and it is within this tradition that Yevtushenko definitely falls. The most important modern exponent of this school of living poetry was Walt Whitman, considered by Ginsburg and others to be America’s best and most important poet. Ginsburg also has suggested that singer-songwriter Bob Dylan is the foremost poet of the age and Dylan has been suggested several times (unsuccessfully) as a candidate for the Nobel Prize in poetry.
The answer to such questions lies in the undisputed fact that in history, in every age, in every culture, in every language the poets and their poetry have been expressions of the living heart of the people and their national character (such as the Romanian poet Eminescu or the Greek poet Cavafy), the direct expression of the human soul. Thus the importance of the Russian poet Pushkin or the German poets Goethe, Schiller and Heine cannot be overestimated, particularly since the modern Russian and German languages, respectively, owe so much to them. In this way, poets can be seen as creators of new language, as Spenser and Shakespeare virtually shaped the modern English language, and although many of them never specialized in political statements, often avoiding them, they have allowed their minds to range over the broadest areas of human endeavor, including government and political theory, as well as more aesthetic subjects dealing with beauty and philosophical meaning.