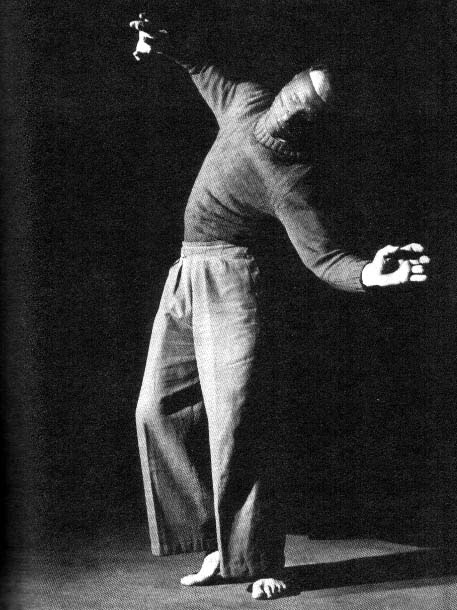 The master of mime, Etienne Decroux, was the teacher of all the major mimetic artists of the 20th century, including Marcel Marceau and the actor Jean-Louis Barrault whom he coached to play the role of the mime Baptiste in the film Les Enfants du Paradis (Children of Paradise).

Decroux was also a radical who had revolutionary ideas about the stage and the relationship of mime to acting (one of the principal themes of Carne’s film Children of Paradise.) In his book Words on Mime, he suggested a 30 year period during which certain strict rules would have to be obeyed. For example all objects that made characters appear higher or lower on stage were to be eliminated, necessitating the actors themselves giving the impression of sitting, reclining, climbing, etc., through their own body positions without props. Born on the Day of Controlled Movement, Decroux felt that actors had specialized too much on speech at the expense of  the body, and thus had corrupted the stage and the art of acting. He also proposed a 20 year prohibition on actors speaking or uttering any vocal sounds whatsoever. Decroux’s new approach came to be called corporeal mime.

Les Enfants du Paradis  is not only an epic, fascinating film in its own right, but also one that operates on many levels. Made in Nazi- occupied Paris during WWII it dealt with political themes and could even be considered a political allegory with its characters representing the Nazi occupiers, the Resistance, and even France itself, represented by the heroine Garance, whose name bears a resemblance to the name of her country.  A second level is that of the conflicting and often contradictory nature of appearance and reality, posing highly philosophical questions. A third is the relationship of spoken theater and plays to the silent world of mime, a subject certainly dear to Etienne Decroux’s heart, so much so, that this perhaps explains why the film’s director Marcel Carne used Decroux himself as one of his actors. And which role does Decroux play? He  plays the role of the father of the male lead, nicknamed Baptiste, portrayed by Jean-Louis Barrault. In real life Decroux actually trained the actor Barrault in the art of mime, specifically so he could play the role of mime in this epic cinematic creation. Moreover, Barrault is so convincing that it is hard for us to imagine, watching the film, that he is an actor playing the part of a mime, so strictly was he trained by Decroux. Fascinating that the master in real life was chosen to play the role of the father of the mime in the film.

It is interesting to conjecture what the making of this film (consistently voted the greatest French film of all time by French and other critics alike) was like in occupied Paris in the spring of 1944. An entire area two or three blocks square at least must have been roped off, and under the watchful eyes of the Nazis it somehow was allowed not only to become a 19th century film set replete with period costumes and props, but in fact a kind of miniature Free France within Occupied Paris. We may conjecture that, ironically, the Nazis themselves were represented as the film’s villains, under the thinly veiled disguise of the aristocrat Edouard de Montray and his men, despite being dressed in period costumes, appearing to the post-war French public as well as to us today more in the role of the Nazi occupiers themselves. Thus Montray’s insistence on protecting Garance and having her become his mistress has chilling significance when the film is considered as a political allegory.

The artistic level of the film stands as a powerful comparison of the arts of acting and mime through the role of the mime Baptiste (played by Barrault) and the actor Frederic Lemaitre (played by Pierre Brasseur). In discovering jealousy through his being forced to observe the obvious love between the married Baptiste and the free-spirit Garance, Lemaitre announces that he can now finally play the role of Shakespeare’s Othello. Later, at a climactic moment,  the criminal Lacenaire (representing the French Resistance) pulls aside the curtain behind which Baptiste and Garance are embracing, thus revealing them to the cuckolded de Montray (representing the Nazi leader) in front of the public attending the mime performance at the Funambules theater.  The many complex levels of the film still fascinate us today, but they must have proved of special interest to the actors and directors who took part in it, particularly Etienne Decroux, whose birthday we celebrate today.