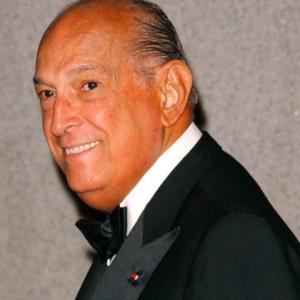 Oscar de la Renta is born on July 22nd 1932 in the Dominican Republic’s vibrant capital city, Santo Domingo. His childhood spent in this tropical island, filled with color, flowers, and sunshine, has and continues to inspire his bright palette and beautiful designs.

In 1950, at the age of 18, Oscar heads to Spain to study painting at the Academy of San Fernando in Madrid. While living there, he becomes captivated by Spanish culture, by the music and art, stretching to the bullfights and flamenco and to fashion.

Oscar’s interest in the world of design grows and he begins sketching for Spain’s leading fashion houses. He soon lands a coveted apprenticeship with Spain’s most renowned couturier, Cristóbal Balenciaga. Working there, Oscar becomes immersed in his craft – observing the sample rooms, studying the clothes and learning the different techniques.

With the belief that you should start at the top then scale your way down, Oscar takes the next step in his career and travels to Paris. There he joins Antonio Castillo at the prominent house of Lanvin as a couture assistant. He continues with his sketching, while further absorbing the extravagant world of haute-couture – the lavish fabrics, over the top feathers, exquisite jewels, and ornate trims. The influences of these extraordinary years spent in Paris are still seen in Oscar’s beautifully embellished designs.

“Working for incredible talents like Balenciaga and Antonio Castillo, I learned about the immense skill and creativity involved in couture work. Today, I apply some of that same detailing and artistry in my own designs.

In the midst of the extravagant Paris scene in 1963, Oscar begins to realize that the future of fashion does not lie not in haute couture, but in ready-to-wear – so he sets off for America. Once in New York, however, at the advice of Diana Vreeland, then Editor-in-Chief of Vogue, he returns to couture designing Elizabeth Arden’s custom-made clothing line. Because Arden is predominantly known for beauty, not fashion, she promotes Oscar’s name on the label and he is able to gain further public recognition, thus paving the way for what will be his own groundbreaking venture just two years down the road.

After years of working with some of the greatest couturiers in the world, Oscar finally establishes a house in his own right. In 1965, the Oscar de la Renta signature ready-to-wear label is created. Combining his Latin American passion for vibrant colors, his European-trained eye for luxurious fabrics and embellishments, and his unique understanding for all things feminine, the label is instantly a favorite among the press and retailers.

“I have always felt my role as a designer is to do the very best I can for a woman to make her look her best. Fashion is only fashion once a woman puts it on.”

In 1967 and again in 1968, Oscar receives the Coty American Fashion Critics’ Award, the then highest possible fashion accolade. Considered the “Oscars” of the fashion world, the prestigious Coty Awards help further put Oscar’s name on the map. Five years later in 1973, Oscar’s talents and successes earn him a distinguished place in the Coty Hall of Fame.

From 1973 to 1976, Oscar proudly serves as President of the Council of Fashion Designers of America (CFDA), an association of the top American fashion and accessory designers. In office, Oscar creates the CFDA Awards, placing the fashion community in control of their own industry awards, rather than Coty sponsoring them. As many designers at the time are beginning to create fragrances of their own, this eliminates any potential conflicts of interest with Coty, a beauty company, hosting the awards.

When I was really small I had this idea that if I could get up early enough, I could bottle the dewdrops on all the flowers and create a perfume.”

Oscar de la Renta launches his first scent, OSCAR, in 1977. He had always dreamed of creating a perfume that in one drop captured all the joyous sophistication of his fashions. With its iconic bottle and uniquely feminine scent, OSCAR continues to be a bestseller in over 70 countries. Today, the Oscar de la Renta fragrance collection includes an alluring assortment of scents for both men and women.

As the Dominican Republic’s best known native son, perhaps one of Oscar’s greatest accomplishments is building La Casa del Niño, an orphanage and school for the children of La Romana. La Casa del Niño cares for 1,200 children on a daily basis, providing schooling up to eighth grade and day-care for newborns on up so their mothers can work.

“All awards are deeply appreciated, but to be recognized by one’s peers is truly an honor.”

Oscar receives the CFDA Lifetime Achievement Award in 1990. Never one to rest on his laurels, he continues working even harder to design and perfect clothes that meet the modern woman’s needs. Thus in 2000, he is recognized again by the CFDA as Womenswear Designer of the Year and in 2007, he is honored once more as the co-recipient of this Award. These acknowledgments from the industry throughout his career are especially meaningful to Oscar, who holds that the most important thing in fashion is staying in power.

AN AMERICAN IN COUTURE

In 1993, Oscar becomes the head couturier at Pierre Balmain in Paris – making him the first American to design for a French couture house. In this role, Oscar is determined to revitalize the house, which had not sold a single couture dress in two years. Believing the prosperity of custom-made lies in eveningwear, Oscar focuses on this area to rejuvenate the business. Today Balmain is among the leading houses for dress sales in Paris. Oscar leaves Balmain in 2002, but continues to apply the techniques he used there to his New York collections.

“Everything I did in Paris was applicable to my ready-to-wear collection, just not practical. At Balmain, we had 15 ladies and two sewing machines, because almost everything was hand sewn. In my New York sample room, I have 15 ladies and 15 sowing machines, so we can make those dreamy fantasies a reality for many more women.”

“A woman makes an outfit her own with accessories.”

To complement the signature of Oscar de la Renta ready-to-wear designs, Oscar de la Renta Accessories is introduced in the designer’s Fall 2001 runway show. Today, the luxurious collection includes bags, belts, shoes and jewelry. Made with the most exotic materials, from ostrich to alligator, this modern and lavish collection represents the ultimate in high-end accessories.

Oscar de la Renta Home is launched in 2002 with a furniture and home fragrance collection. Inspired by de la Renta’s personal residences in New York City, the Dominican Republic, and Connecticut, the line has three distinctive themes – city, island, and country. Since then, tabletop, decorative fabrics, wallpaper, bedding, rugs, and decorative accents have been added to this diverse collection.

“My entire concept of lifestyle is built on the foundation of my homes. There is no more important expression of this concept than that of my own personal living space.”

The Oscar de la Renta retail division is launched in 2004 with the opening of the designer’s first freestanding store on Madison Avenue in New York. Dominican coral stone and high-gloss white anigré wood are used throughout the boutique to create a simple yet elegant backdrop for de la Renta’s signature women’s ready-to-wear and accessories collections.

The Oscar de la Renta retail network in the United States has since expanded to include freestanding boutiques in Bal Harbour, Costa Mesa, Dallas, Las Vegas, Los Angeles, and Manhasset.

“My designs are known for their beautiful ornamentation, details, fabrics, and embroideries – which are never more important than on a wedding dress.”

The retail division of Oscar de la Renta expands globally in 2008 with the opening of boutiques in Madrid and Athens. As the first international free-standing stores, their introduction marks the expansion of the retail network to ten locations worldwide.

Madrid in particular holds special meaning for Mr. de la Renta, as he began his career there in the 1950’s sketching for EISA, Balenciaga’s haute couture atelier. He stated that Madrid was a logical choice for the brand’s international debut, “for sentimental reasons, of course, and commercial ones, too.”

“I have never worked as hard in my life as I do now, but I am loving every minute of it. My best times are when I am in my studio designing.”

Today Oscar de la Renta is one of the leading design houses in the world. The company has seen an influx of great young talent, as it continues to grow and expand as a global brand. De la Renta has also brought in many of his own family members to help build continuity and a foundation for the label’s future success. His son-in-law Alex Bolen operates as Chief Executive Officer, step-daughter Eliza Bolen serves as Vice President of Licensing, and his son Moises de la Renta works in the Design Studio.