New museum of a striking beauty in Antwerp.

Recently a new building and museum has been opened in the city of Antwerp adjecent its vast harbour area.
The Mas (Museum at the stream – free translation) has already been remarked for its architectural beauty by many different art lovers.
It is for example ranked in the top 14 of most beautiful museums in the world by ”travel + leisure” magazine:

Architects Neutelings and Riedijk alternated between red sandstone from India and glass panes to give this riverfront museum a distinctive look that’s modern even as it recalls the 16th-century storehouses used in Antwerp’s old port. The connection to the city is in the details as well: if you look closely at the 203-foot-tall building, you’ll see 3,185 silver hands, the symbol of Antwerp. The vertical “boulevard”—a series of elevators that follow the glass spiral of the building—provides sensational new views of the harbor and rooftop from every level and leads to the rooftop, open until midnight.

At the heart of its story is a long history of exchanges between the city and the world. The MAS tells new stories using the traces of these exchanges. About the city, the river and the port;  in short about the world in all its diversity and about Antwerp’s centuries-long connection with the world.

The MAS tells this story through a temporary exhibition, a visual storage and four themes that appeal to everyone and affect every one of us. These four themes can be found on floors 4 through 8. Display of Power – On Prestige and Symbols (4th floor ), Metropolis – On Here and Elsewhere (5th floor ), World Port – On Trade and Shipping (6th floor), Life and Death – On Men and Gods. On the Upper- and Underworld (7th and 8th floor ).

The MAS new home for collections from a number of former Antwerp museums. It also houses the collection precolumbian art of Paul en Dora Janssen-Arts. But it also looks at the city and the world outside its walls. The stairways to the top floor reveal different perspectives on the city and the harbor and industrial area lying to the west side of the city and the museum.
Using curved glass construction on shifting sides of the building, one literally ascents a spiral tap towards…the top of the town and a view likely to be most surprising. In fact it shows how the Antwerp city skyline is dominated by red and grey rooftops, ugly skyscrapers of a similar size and many fairly old fashioned church towers and chimneys on the industrial side. Compared to the perfect order that this building transmits, its surroundings could do with some refinement, so it seems. 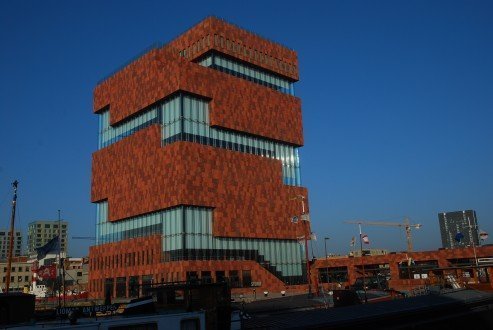