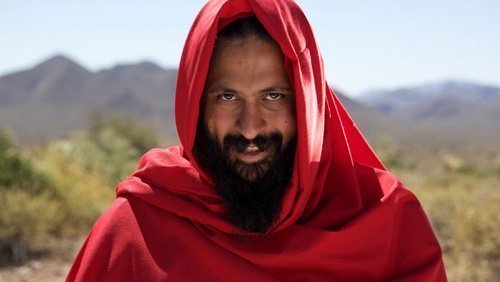 A great documentary  film on a fake Guru. These are  in short the terms that we could use to describe this wonderfully edited documentary.

In short we follow the life of a self made Guru, who in fact does not want to be one at all and also does not believe in them. But as he is drawn to the concept of Guru’s  he actually invents a way to deal with his alter ego to be: the Guru Kumaré. Although being from Indian parents but entirely brought up in America, director and leading character Vikram Gandhi, pretends to be from a small village in India. But that he truly is an American like his disciples, is never even considered as he fully adopts a typical Indian accent and dresses and acts according to what Guru’s are supposed to look and sound like.

By simply telling his devoted followers that he is but a mirror of themselves and that they should not be deceived by his appearance, he is in fact not telling or teaching them anything unreal, apart from lying about his true nature. His followers actually receive great strenght from being in his group and gain trust in themselves. They share moments of revelation through meditation and yoga just like they would have expected to get from a ”real” Guru. He himself is having serious trouble at the end of his voyage to unification with all and everything surrounding him to reveal his true and ordinary nature. It appears that both Guru Kumaré and following need one another and that the teachings are fundamentally right for some.

The power of the film partly lies in the fact that it humoristically and sometimes cynically shows how easy people can be deceived by appearances. The powers of director and ACTOR Vikram Gandhi in getting this message across, cannot be underestimated and have made this film to become such a great documentary.

Noteworthy is the fact that 10 out of the 14 group members of his spiritual sessions, are still in contact with him. They share deep respect for one another in some cases. Others probably felt deceived and may even be hurt by all that was taking place during the making of the film.