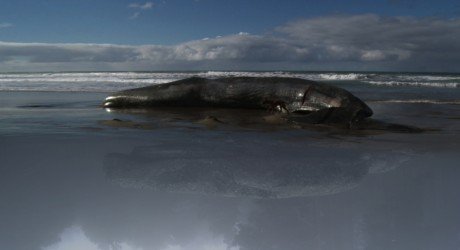 Cameraman and director Victor Kossakovsky is renowned for his lengthy observations. His films feel like meditations and explorations which truly give meaning to the cinematographic documentary invented by its masters of the 20th century. In daily life he is also not a huge public speaker. It is his nature to sit back and relax, observe and then come up with an idea or a film in this case. After the screening of his latest film Vivan los Antipodas!  (long live the antipodes – meaning places on earth that lie exactly opposite one another on the globe) he explains that he was most taken by the fact that he had filmed the death of a giant whale on the coastline of New Zealand and a similar looking rock formation in Spain on the other side of the world. But it can be argued that there is more to say about this film then this coincidence in form. Parallel or contrasting ways of human existence on a daily basis were seamlessly edited together in this must see documentary for the big screen. Sound and vision merge together and create a world of its own.

Where would you end up if you were to dig a straight tunnel from one side of the world to the other? This question has aroused the fantasy of many writers, children, and now documentary filmmaker Victor Kossakovsky. He didn’t just fantasize about it, but really went on a journey (albeit not through the earth) and filmed four pairs of antipodes: Argentina and China, Spain and New Zealand, Hawaii and Botswana, and Russia and Chile. There is no narrative to provide direction – instead, Kossakovsky lets us wander around the world while the music tells us where we are. In contrast to his earlier work, ¡Vivan las Antipodas! is a grander cinematic portrait in which the landscape plays a more important role than the people in it. But the director’s signature style is recognizable in the details. We meet two bridge keepers in Argentina who devotedly go about their business. They enjoy the sun and discuss what the weather will be like next week, on the basis of how a frog is croaking. Kossakovsky is playful with both his camera work and the editing. Sometimes, he quite literally films the world upside down, or zooms out until the curvature of the earth bends the frame.