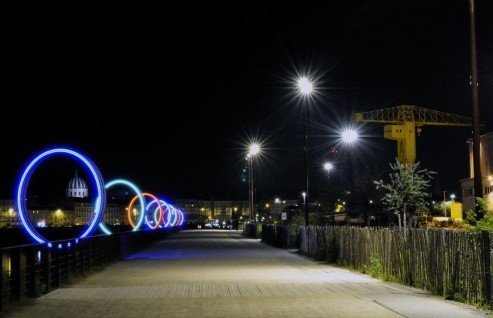 Located 30 minutes away from the Atlantic Ocean, on the Loire Estuary, the quality of life of the 6th biggest city of France is regularly quoted as an example in the rankings. Invigorated by the sea air, the city is ventilated by more than 1000 hectares of green spaces and the traffic flow is made smoother thanks to 42 kilometers of tramway lines. The ambition for the sustainable city has emerged at all scales : from the Eco-Métropolis Nantes-Saint-Nazaire to the Ecodistricts. This focus is particularly on the Isle of Nantes, where the development of
337 hectares represents one of the largest urban projects in Europe.

The maritime city of the West of France is full of surprises and attracted more than 104 200 newcomers in 5 years and 2.7 million visitors in 2010. Nantes benefits from a cultural and tourist attractiveness that makes it unique at national level. Live performances, exhibitions, concerts and tourist attractions interact with an original andcoherent offer. The figureheads of these numerous suggestions are : the Castle of the Dukes of Britanny (188 600 visitors in 2010 at the Nantes History Museum), the Machines de l’île (283 211 visitors in 2010) and the artistic tour Estuaire (723 000 visits on the sites during summer 2009). Nantes also possesses many heritage or contemporary treasures. The Passage Pommeraye, a shopping arcade dating back from the nineteenth century registered historic monument, amazes the visitors with the splendour of its architecture.

On three levels and under a monumental glass roof, this atypical place offers shopping stops in an environment from another time. On the Isle of Nantes, a perpetually changing area, contemporary architecture has the leadin role. On both sides of this territory perched on the Loire river are standing resolutely original and innovative buildings built by the greatest international architects. Formerly occupied by the shipyards (closed in 1987) and by industries, this area is in complete rehabilitation and finds some harmony between the conservation of industrial heritage and the development of a new modern space. The city also has 2 major theatres, 14 museums, 36 theatres and auditoriums. All these elements contribute to the cultural effervescence of the city, to its dynamism, its radiance and establishes Nantes as an essential destination.

Key figures of the place of destination:
– 590 000 inhabitants in the metropolis
– Nearly 2,7 million tourists in Nantes in 2010, among whom were about 20% foreign
visitors in summer
– An international airport transporting close to approximately 3 million passengers
– 120 direct destinations amongst which 54 are regular
– 7 200 accommodation rooms
– 283 000 visitors at the Machines de l’ile in 2010
– More than a million visitors at the Castle of the Dukes of Britanny
– 730 000 visits which is 170 000 visitors on the Estuaire sites in summer 2009
– Green capital of Europe 2013
– A tour gathering the creations of more than 40 internationally renowned artists
– 8 major cultural installations
– One environmental, industrial, historical or contemporary heritage