The Power of the Dove 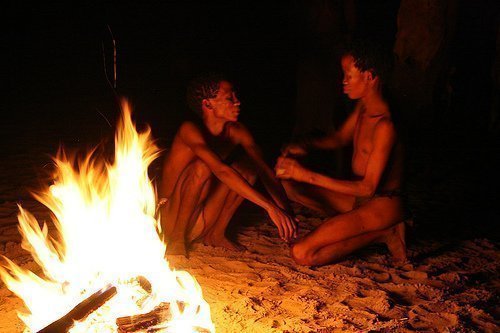 The sun is setting over the Kalahari desert. It’s been a hot day. I am in a remote settlement in northern Botswana. Tsitano, a traditional healer of the San people (formerly known as Bushmen, the oldest people on earth) is preparing himself for the night. He is going to perform a healing dance for one of the members of the community, who is suffering from a terrible cough. I have seen the woman earlier today, when I went to visit her with a nurse. She has been diagnosed with tuberculosis. Many people here suffer from it, often in combination with HIV. The woman looked weak and she coughed up blood. Western medicines have not helped much. In spite of treatment with long term antibiotics, she is very ill. People here are poor and mostly undernourished.

Tsitano tells me he will try to ‘power her up’ during the dance. I am here to make a film about traditional healers in southern Africa and I want to know all about it.

‘The power is not mine,’ he explains. ‘When I do the healing dance, I dance for a long time and slowly begin to change, and then I fly away. Away to another place, where I meet my ancestors and the animal from which I receive my powers. Then, I return to the earth and transfer that power to the patient.’

While some boys start building a fire, Tsitano tells me that his power animal is the dove. People begin to arrive. It goes dark quickly. The patient, a thin woman in her thirties, is helped to the fireside by some older women. As soon as it is fully dark, the ceremony begins. There are about thirty people sitting around the fire, mostly women, and they begin to clap their hands and chant in hig pitched, ethereal voices. My camera is rolling. 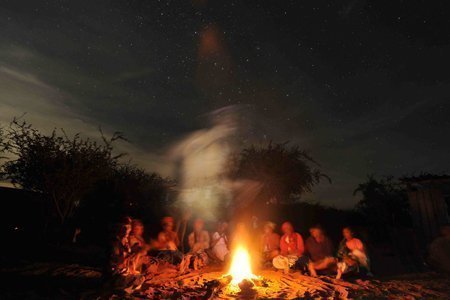 Tsitano appears. He is wearing an animal skin, some beads and has wound strings of rattles around his legs. He begins to dance around the fire with a slow shuffling gait, sometimes stamping rhythmically. Two hours go by. Everyone seems to be slipping into a trance. I certainly am, from the hypnotic music, the fire and the great silent night around us. Then, a change comes over Tsitano. He starts to shake and his face takes on a different, vacant expression as if he has left his body and has travelled far away. He dances faster. The clapping and chanting work towards a frenzied pitch. Suddenly, Tristano opens his eyes. He has returned and dances towards the sick woman. He puts his hands onto her shoulders and lets out a series of low pitched groans and shouts. This is the moment when the woman is receiving the powers he has transferred from that other world, where the ancestors live. She seems to be ecstatic. When Tsitano is finished, her face relaxes and she dozes off.

The dance goes on for hours, another healer joins Tsitano, and many people around the fire are touched and powered up by the two shamans. Including myself; when Tsitano puts his hands on my shoulders, I do feel a current of strength running through me.  Imagination or not, it feels good.

The next afternoon, I meet the nurse who is working on the tuberculosis project again.

‘How is your patient?’

‘She seems better. I even saw her smile. She has eaten and it looks like she is a little stronger than before. For as long as it lasts.’

I thank her and I feel sure: Tsitano is for real. He has transferred some of the strength of his power animal (the dove) to the patient. Whether there is a real transfer of ‘power’ involved or whether it is only a metaphor, he has really helped her. For as long as it lasts.

Ton van der Lee is a writer and film maker. He has lived in Africa for more than twelve years, has published 8 books about Africa and made various television documentaries about it. Spirits of Africa is his new film project.

About the author: Ton van der Lee Ton studied literature in Amsterdam, then became a film director and producer. He has travelled extensively all over the world and has lived in Africa from 1996 to 2007. He still has a home in Mali, published 8 books on Africa and other subjects and has made a number of documentary films, most of them about Africa. His new documentary film The Promise premiered at the Dutch Film Festival in September 2011 and was broadcast on 10 Feb, 2011. A new book came out in October. Currently he is writing a novel about corruption and aid in Africa.