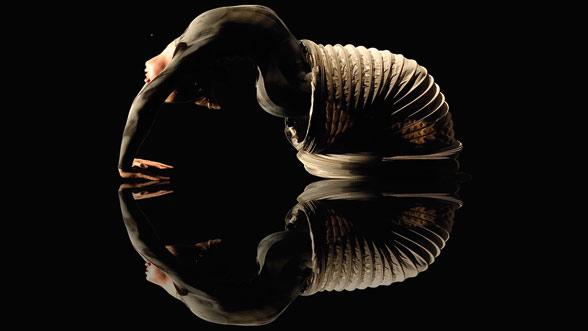 We had best seats for this most promising performance and I went in to see the show without any observations or detailed information on the act and the dancers and performers beforehand.

We live in a time where the circus and theatre are having a hard time. We can understand the declination in its significance because of the overwhelming input we get through cinema, tv, computer games and the Internet. Seeing live shows in a theatre is not a thing that many people do and that many can afford to do regularly, as seats can be fairly expensive. To find ways for circuses, theatres and filmmakers to still attract massive scale audiences so they can survive and continue working on their craft and abilities is always a challenge.

If you enjoy watching a variety of stunning acrobatic stunts in combination with a cinematic experience EVOLUTION is something you cannot afford to miss. Circus theatre is the official term by which Corpus Acrobatics should go and they should not be mistaken with a circus nor with music theatre.
Seated just a few metres away from the centre of the stage, I had a great experience in which I witnessed a show that combines both acrobatics of a very high level, with a set design and video projections giving depth through separate layering on stage at the same instant.
Combined with extreme precision performances of a group of young powerful male and female acrobats, this is the night out for the entire family whilst getting close-up to their athletic dance to a point where one can actually hear them breathing.

Suited for large-scale audiences at an in or outdoor setting, this show could also run in a smaller theatre with just 500 to 800 seats for example. In different scenes the spectator is taken through various phases of evolution on our planet and many references are made to the powers of nature and wildlife itself. Eventually, the show’s finale undoubtedly refers to the importance of guidance and truthful use of our planet and all that lives and belongs to it. The presence of a ” benjamin” is a bonus. A truly young acrobat in the midst of the agile performers – showing-off her skills to a full theatre, could easily be mistaken for a panther or a snake.  Those were also the moments for young kids in the audience to get a bit closer to the world of both theatre, circus and top class gymnastics by identifying with the little girl.

What else could they be craving for in times like these ?

Previous post: Shame through the eyes of Mc Queen