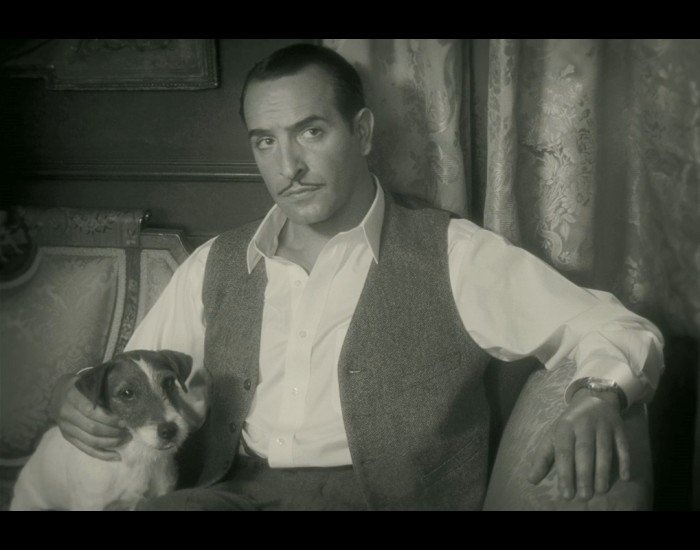 Jean Dujardin and his dog in 'the Artist'

is a 2011 French romantic drama film directed by Michel Hazanavicius and was shot entirely in black and white.The story takes place in Hollywood between 1927 and 1932 and focuses on the relationship of an older silent film star and a rising young actress.

Making a silent movie feature film close to a 100 years after the cinema industry said its final goodbye to the entire genre seems like a dead end to ‘no man’s land’. The artist, co-starring Jean Dujardin (George Valentin) and Bérénice Bejo (Peppi Miller), reminds us that true cinema can still be found in the details and not in technique.
The silent era in cinematography depended on expression through staging, lighting, clothing and often rather corny looking ‘special effects’. Shot in black and white with no synchronous sound used during recording and projections, it needed a live orchestra  to go with it. The audio bit , usually with a traditional orchestration, did not have any true sounds like wind or what we call ‘ foley’. So no gunshots, glass breaking or the sound of shuffling or stumbling eerie footsteps going up a dark staircase. That appeared a little later with soundtracks added to the filmstrip. Before it was just a drum beating or a steel brush on a cymbal.

It explains why cinema theatres were in the early 20 ties still very much like ordinary theatres. Some had a piano to play live sound scores to the moving images and bigger halls had a conductor and his musicians playing in the orchestra pit to the images on the wide screen above them, just like in an opera house setting, still today.

We live in times that the cinema industry like the idyllic world of cinema actors and of large-scale studio production for silent movies in black and white is maybe in the midst of a comparable struggle. The Internet – you are using right now- is adopting a lot of the properties that cinema and TV to such an extent that Hollywood has become afraid the genre of cinema as we know it today, might be an endangered species in the arts and entertainment industry. The film industry has lost its grip on large scale audiences once before as that happened to large cinema chains in the 60 ties when TV was introduced. When people can enjoy a film, piece of music or a short video at home, they simply do not need to go out and get tickets for theatres. Hence, all sorts of legal measures are about to be taken, to diminish the free powers of the Internet. But going into that matter would lead to far, for now at least.

In my opinion, cinema will always change throughout time and not easily die out, but simply adapt to the techniques offered to it as times themselves are changing and attracting an audience interested in new ideas and ingenious ways of production.
But what any story, especially a love story, always needed and needs is a few fine actors, a good story and …drama.

But also, silence in today’s cinema can still be powerful. Sometimes leaving a silence is all we need to re-enter the story as if it were a pause on a true live theatre stage. In music ‘silence’ is of importance too and that is the reason why the two blend in so nicely. Sound and vision.

The makers of ‘ the artist ‘ have managed to bring back the true nature of cinema in the early decades of the 20th century and show us that ‘ the silent movie’ or ‘silent moves’ are not dead at all. It can actually be a new experience for us.

Most of the film itself is silent and has received wide praise from critics and many accolades. Jean Dujardin won the Best Actor Award at Cannes Film Festival 2011 where The Artist premiered.