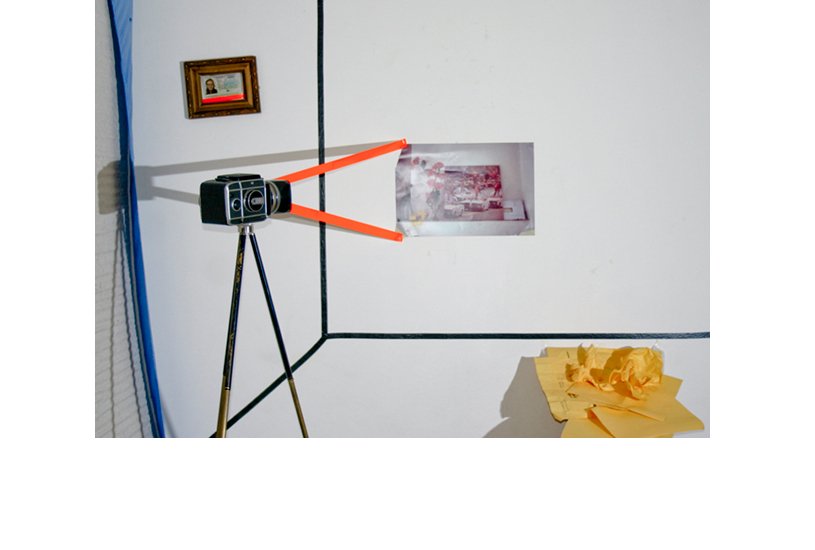 For lovers of experimental photography in Paris, TPTP’s December-show, It Has Happened, was a thought-provoking group exhibition which did not disappoint.

Unlike its predecessor Residue, this exhibition seemed to focus less on process and more on the power of the fully realized image to evoke other worlds than the strictly documentary. The central question, then, was to what extent we could consider each photo to be an autonomous work instead of a direct reference to a real past, or a faithful reflection of reality.

On one end of the spectrum, there was the highly textural and non-literal. In his work “Untitled”, Lutz Baumann investigated texture and volume, as well as the theme of absence. Using two orange diagonal lines made of tape which radiated from either side of the photograph, he firmly anchored his work in the realm of the abstract.

On the other end, we saw Evi Lemberger’s “Girl, Vari” which examined fragmented cultural identity. Lemberger adopted the intensely personal perspective of the outsider as she showed us a gypsy girl proudly displaying her wedding dress. A member of the displaced and marginalized population of Transcarpathia, the nineteen-year-old candidly shares the happiest day of her life with the viewer.

Next, in “Love, Pinkie”, Daniel Holfeld used photography to document the private identity of a very public leader. The photo of the late Benazir Bhutto’s intimate letters to her family presents the tangible remains of her private legacy.

Finally, in “Sans Titre (Filature)”, Anahita Razmi reconstructed the observation photo of artist Sophie Calle viewing a painting in a gallery. By divesting the image of its original narrative, however, Razmi potently blurred the boundary between art and reality.

In conclusion, It Has Happened impressed and delighted visitors with its diverse responses to the question of the essence and limits of photography.

About the author: Jasmine Soori-Arachi A native of Omaha, Nebraska, Jasmine Soori-Arachi was awarded a B.A. cum laude in Cultural Studies (specialization psycholinguistics) from Utrecht University in the Netherlands. Instead of continuing her career in linguistics, however, her love of acting convinced her to pursue a life in the theater. She subsequently trained at the international theater school ITS DNA, and then at the Dutch national conservatory for acting and cabaret (Kleinkunstacademie Amsterdam). Afterwards, she continued to learn from such masters as Shusaku Takeuchi, guest choreographer of Nederlands Danstheater and Ola Mafalaani, guest director of Toneelgroep Amsterdam, and artistic director of Noord Nederlands Toneel. In Amsterdam, she also worked with Theaterworks Amsterdam where she played Abigail in Arthur Miller’s The Crucible. Interested in creating multi-disciplinary theatre, she founded her own theater company, Chrysalis and wrote, produced and acted in the play Personae as well as produced a commedia dell’arte adaptation of Shakespeare’s Twelfth Night and produced and acted the role of Margarethe Bohr in Michael Frayn’s Copenhagen. While acting Shakespeare in Geoff Bullen’s class during an intensive at the Royal the Academy of Dramatic Art in London, she developed a passion for theater research. This eventually led her to France where she is currently completing her Master’s in Theater History and French baroque opera at the Sorbonne in Paris. In August 2010 she organized and curated an international residency for contemporary art called Return to Walden with the participation of nine artists from around the globe. The exhibition then travelled to the gallery TPTP in Paris in September 2010 where it enjoyed continued success. From December 2010 to January 2011 Jasmine was an intern for Mariame Clement on her production of Rameau’s Castor et Pollux at Theater an der Wien in Vienna. In February, 2011 she created and acted in a production about Marie Antoinette for the theatre of Villeneuve, in Burgundy. In June, 2011 she was the assistant stage director and scenographer for Notes from the Underworld– a dance/music/video/theatre piece directed, choreographed and performed by Namiko Gahier which premiered at Le Petit Festival in Dubrovnik, Croatia. In July 2011, she directed a multidisciplinary production of Shakespeare’s A Midsummer Night’s Dream with baroque music and modern dance in Passy, Bourgogne. In January, 2012 her production Arlequin, Empereur dans la Lune featuring baroque theatre and opera combined with contemporary and traditional Japanese dance premiered in Villeneuve-sur-Yonne in Burgundy, France. Future projects include directing V pour Velours for violinist Stephanie Paulet at L’Abbaye de Royaumont in June, as well as acting in Sorcieres! a music / theatre production with baroque music for organ performed by Stephane Fuget in August, directing and acting the role of Miranda in The Tempest, in Sri Lanka in December, 2012, as well as directing Mozart’s The Magic Flute in Cameroon in 2013.

Next post: To preserve or to enjoy: that’s the question