In development for decades by Francis Ford Coppola, who remains a key producer on the film, the eagerly anticipated big screen adaptation of Jack Kerouac’s “On The Road” has been a long time coming. But the project’s lengthy journey has finally seen the light of day, as the post-production was finished recently and the European theatrical release was yesterday. And we witnessed this great road movie’s premiere with great expectations. And we must say: yes it is a must see! The Motorcycles Diaries” director Walter Salles is at the helm, joined by a promising young cast in Sam Riley, Garrett Hedlund, Tom Sturridge and Kristen Stewart, as well as veterans like Viggo Mortensen, Amy Adams, Steve Buscemi, Kirsten Dunst and Terrence Howard.

On the Road was one of my favorite books when I was a teenager. In those days, I did a lot of hitchhiking myself and when we got a bit older we were driving cars, sometimes drunk, sometimes sober. We were drunk on life and traveling itself. Basically, we did most of the things the film’s protagonists are all into: drinking, making love, drug abuse, with endless energy and preferably a full tank of gas.

The friendships between the four or five main characters in the movie are played out well; we understand why the charismatic Dean Moriarty leads his gang of young hipsters looking for their identity across the USA with relentless power and that they keep following him around. His deadly destructive character is well performed and Kerouac, the lonely and laid back traveler, fits well within the group of youngsters.

These actors are very well cast for this genre; they are playing themselves almost. Also, the camerawork and the perfect lighting and locations make this film once again a successful  road adventure Walter Salles became famous for after filming the motorcycle diaries. In fact, the genre is his visa into making other similar projects. From a previous quote before it’s release:

“We just finished the edit and the mix in Paris,” Salles :”There are still a few steps left until the film is completely finished (designing titles and credits, getting the digital workprint back to 35mm, etc.) The independent company that produced the film, MK2, is now working on the site and trailer. As for release dates, they tend to vary from country to country when a film is distributed independently.”

One variable is evidently the release in France, which producer Charles Gillibert mentioned on Twitter is set for May 23rd, running concurrently with the tail end of this year’s Cannes Film Festival (scheduled for May 16-27). This primes the film for a potential premiere on the Croisette, which will precede the Gallic theatrical release. In a similar manner, Terrence Malick’s “The Tree Of Life premiered at the festival last year before being unspooled in French cinemas a week later. Unlike Malick’s film, though, “On The Road” doesn’t have North American distribution in place yet. So while the film looks like it will premiere and be released in France within the next five months, a U.S. date could be a bit further off.

Finally, in case you’re unaware, here’s a little trivia about Kerouac and Hollywood’s flirtations with his renowned novel. Boing Boing has dug up a letter penned by Kerouac in 1957, earnestly asking Marlon Brando to star as Dean Moriarty and help him adapt “On The Road,” in a version that would have seen the author himself star as Sal Paradise. He aimed to “re-do the theater and the cinema in America, give it a spontaneous dash, remove pre-conceptions of ‘situation’ and let rave on as they do in real life.” Kerouac’s idea was to film it with a “camera on the front seat of the car showing the road (day and night) unwinding into the windshield, as Sal and Dean yak.” Sounds like a more talkative version of “The Brown Bunny.” 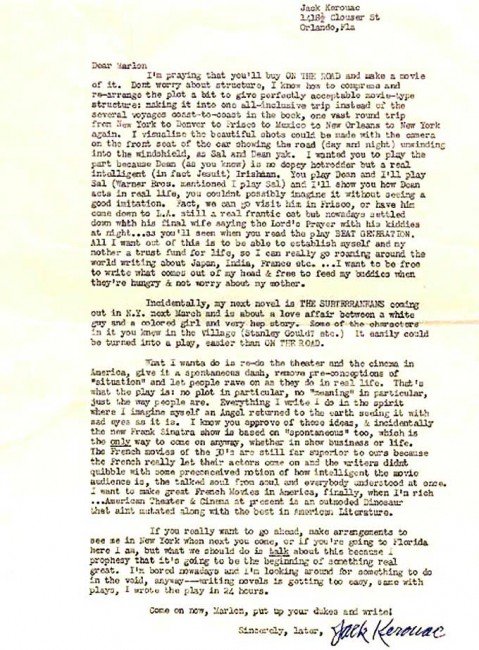