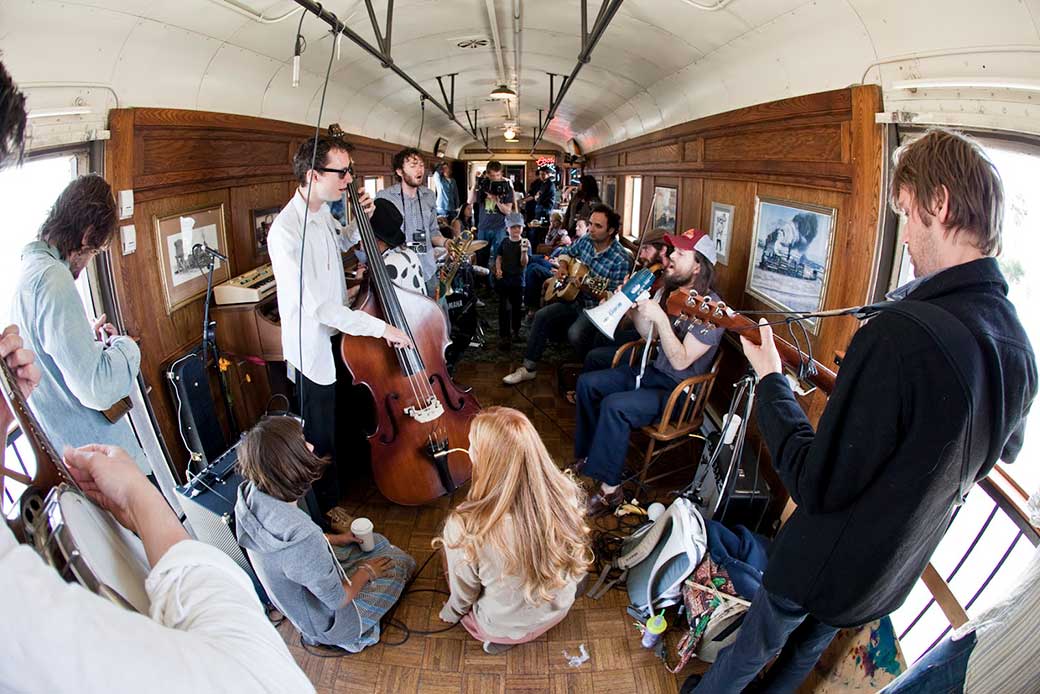 If a road movie is supposed to be on wheels, this doc on an exceptional train ride over 2000 miles with 3 folk bands in it, is a memorable new way of looking at what a road movie really is. As the musicians in this tour are welcomed by enthusiastic fans along the tracks where several concerts are given, as an audience we get closer to their daily life of mostly jamming in mixed settings as the southern states of the US float by. The entire crew is having the time of their lives and with New Orleans as a final stop and open air concert, both audience and band members get everything out of their life, travel and making music together. Some of the songs we do know, some are improvised, some inspired by Woody Guthrie, Dylan, or other beatnik and gypsy-like characters from ..already..way back.

However, the protagonists seem to still live in a time where harmony and music play a major key in their lives and dreams. The term used by a copper ‘ a bunch of hippies’ is not too badly issued. It is quite true that those who are aboard of the express train, shining silver lighting through the desert, is a marvel that not too many can ever experience the way these bands do. Using a not so still camera movement, out of focus and too heavy inaccurate panning and sometimes a shift from color to black and white in the editing, the film firstly comes to me as a not -so- well- done- doc, more or less a ‘ just shoot and see’ enterprise. But through the great singing, playing and ‘just being together on stage’ feeling all around, it does not seize to amaze.

A great trip and concept and foremost good soulful music and musicians.

(THE WHITE STRIPES UNDER GREAT WHITE NORTHERN LIGHTS) this incredible new film captures nothing less than history in the making.

Inspired by folk, rock, country, and bluegrass, the London-based Mumford & Sons feature Marcus Mumford, Ted Dwane, Ben Lovett and Winston Marshall. The Foursome started playing together as Mumford & Sons in 2007, although they were all playing with different bands at the time, they bonded over their shared love of rootsy music. Between 2008 and 2009 the band released three 10″ vinyl EP’s, before being signed to Island Records in the UK and beginning work with producer Markus Dravs (Arcade Fire, Maccabees) on their first full length. Sigh No More was released in October 2009 and the band was shortlisted for the BBC’s Sound of 2009 Poll. It was issued in February 2010 in America through Glassnote Records. The achievements of Mumford & Sons since the albums’ release has been a success story rarely matched of recent years, in an industry we’re regularly led to believe is in constant decline. In each and every town and city that has welcomed the band has been treated to a jubilant and suitably intimate performance, regardless of the size of the venue.

Old Crow Medicine Show got its’ start busking on street corners in New York state and up through Canada, winning audiences along the way with their boundless energy and spirit. They eventually found themselves in Boone, North Carolina where they caught the attention of folk icon Doc Watson while playing in front of a pharmacy. Watson immediately invited the band to play at his MerleFest, helping to launch their career. Shortly thereafter the band relocated to Nashville for a residency at the Grand Ole Opry, where they entertained the crowd between shows.

It’s been nearly fifteen years since those humble beginnings, and the band has gone on to tour the world, sell over 700,000 albums, become frequent guests on A Prairie Home Companion, and play renowned festivals like Bonnaroo, Coachella and the Hardly Strictly Bluegrass Festival.

Old Crow Medicine Show (Ketch Secor, Critter Fuqua, Morgan Jahnig, Gill Landry, Chance McCoy) now have four studio albums to their name, three of which were released by Netwerk Records—O.C.M.S and Big Iron World produced by David Rawlings, and Tennessee Pusher produced by Don Was. On their newest album, Carry Me Back, Old Crow continue to craft classic American roots music while pushing themselves in new directions. Carry Me Back, released by ATO Records and produced by Ted Hutt, represents a new stretch of road in the timeless journey of a rambling string band.

Edward Sharpe & The Magnetic Zeros formed in 2007 after singer Alex Ebert met fellow singer Jade Castrinos outside of a café in downtown Los Angeles. In 2009, the 10 member troupe released their debut album Up From Below which featured the universally appealing hit “Home” as well as fan favorite’s “40 Day Dream” and “Janglin”. The past few years have been spent constantly touring the world while winning over audiences at festivals like Coachella, Bonnaroo, Lollapalooza, Leeds, Austin City Limits and more. With their follow up album Here featuring “Man On Fire” and “That’s What’s Up” recently being released, the band will tour Europe and the North America this summer while a third album is expected by the end of the year.