Antwerp and its Fashion Academy 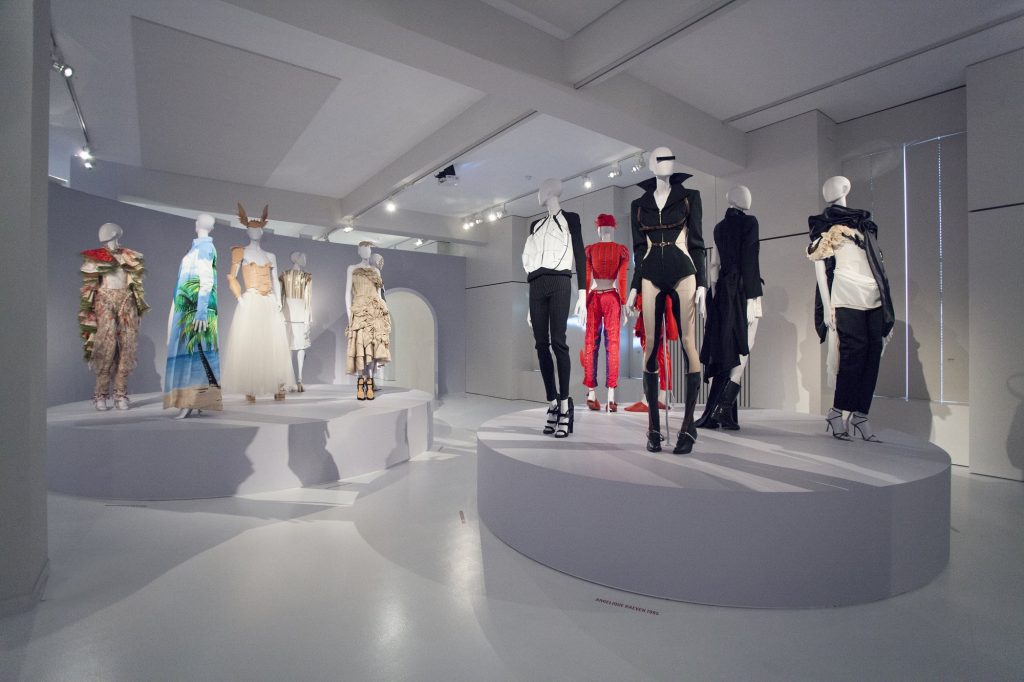 The city of Antwerp, Belgium, celebrates the 50 year anniversary of its Fashion Academy along with the 350 year anniversary of the Royal Arts Academy. Foremost known for its old masters in painting, recently more established as the place where trendy upbeat music is created, there can be no discussing that Fashion Design is the most pivotal trademark within the city’s art range today.

The Avant-Garde look and feeling of the Antwerp six in the 80-ties was the start of an indelible fashion sound and vision cocktail resonating  the city’s heartbeat.

Antwerp is home to a number of great musicians, bands, actors and painters who one regularly meets in local pubs. Nightlife ( and superb Belgian beer) is and was an instigator for crossbreeding within the arts.

6 well-known fashion designers nowadays : Ann Demeulemeester, Dries van Noten, Dirk Bikkembergs, Walter van Beirendonck, Dirk van Saene and Marina Yee , together drove a van to London Fashion Week in 1986. Their first order came from Barneys in New York, and other stores soon followed.   It turned out to be the start of a new movement which put Belgium, and the Antwerp Fashion Academy, on the global fashion map, paving the way for subsequent generations of Belgian designers.

Antwerp likes to stand tall, looking up as it were ( with a strong sense of identity and pride) to big fashion brothers and sisters London and Paris.

It is a crossroads of culturally and historically bound territories and the rather small size of the inner city attracts those who both like the cosmopolitan and the subtle, yes, almost provincial touch of the city at the same time.

For its special 50 year anniversary, MoMu, Antwerp’s fashion museum, has put together an ambitious exhibition that examines the entire history of the Royal Academy’s fashion department. It begins on the museum’s staircase with a timeline that tells the story of the school from its founding in 1963 to the present day. A significant portion of which is devoted to Linda Loppa, the head of the fashion department from 1985 to 2006, who is widely credited with its success.

Karen van Godtsenhoven, the curator of the exhibit, pointed out that, as the fashion department’s reputation grew, the composition of its students evolved from being all-Belgian to a more international. Indeed, today, the Royal Academy is an elite fashion school that is notoriously hard to enter and difficult to complete

The ‘Antwerp Six’ on London Fashion Week 1986 : ‘’We rented the cheapest space we could find, which turned out to be amongst bridal-wear on the second floor. The first day nobody came. So we printed fliers and went to the first floor and gave them out to buyers.”

Over time, the Six achieved enough traction to start showing in Paris — and Belgium became synonymous with cerebral, avant-garde design.

In 1986, the term The Antwerp six was born after the success of the designers aforementioned.  The exhibition room devoted to the “Antwerp 6 + 1” — the “+1” refers to the enigmatic Martin Margiela — is a treasure trove of rare outfits and images. Margiela, who is often wrongly credited as being part of the “Antwerp Six” was the only one who, after graduating, scored his dream job, working in Paris at Jean Paul Gaultier.

“It was a very active and inspiring period when we were studying. First, you had the Italians with Versace and Armani. Then you had all the French designers with Mugler and Montana. Afterwards, you had the Japanese, Comme des Garçons and Yohji Yamamoto. That all happened during exactly the four years that we were at school; so we were really overwhelmed by these powerful fashion statements.”

Although the Antwerp six are of elementary value and represent the kind of team spirit one needs to get anywhere in Fashion while setting up a label and identity, we should not forget that many other great designers have graduated from the Academy.

To name just a few we could say that Raf Simons, Christiaan Wijnants, Les Hommes, Veronique Branquinho, Jurgi Persoons or Bernhard Wilhelm are just a handful of equally successful and talented craftsmen and most of them were educated and inspired by one another. Or Kris Van Assche who moved to Paris in 1998 after graduating in Antwerp. Having worked for Yves Saint Laurent and then Dior Homme, he started his own label KRISVANASSCHE in January 2005. He has also been the Artistic  Director for Dior Homme since April 2007.

‘’The Academy’s students have become more cautious’’, noted  curator Van Godtsenhoven. “You can see it in their work, which is a bit safer now, but the Academy tries to push their boundaries,” she added.

Well-established fashion photographer Ronald Stoops who is always accompanied by his partner, stylist Inge Grognard made 12 XXL photos of iconic silhouettes of Antwerp fashion designers, presented on 10 meters tall shipping containers around town. They are also a good example of teamwork within the arts, breaking boundaries. Interesting detail is that Stoops started off being a model for Walter van Beirendonck.  “I was modelling for Walter when he started making clothes and he told me that he needed a photographer and that I should pick up a camera. I learned everything on my own.”

A similar thing happened to Raf Simons, who had initially never thought of becoming a fashion designer, but ‘stumbled upon it’. after he was given the advice to study fashion by the former director of the Fashion department, Linda Loppa.

Indelibly present now, the Fashion Museum or ‘ MoMu’ is a strong core for all these talents and their ideas. MoMu is located in the heart of town in a V-shaped 3 story high building in the Nationalestraat, connecting the centre with its trendy south side area. 15 years ago the entire building was still entirely empty. Just 100 metres away from Dries van Noten’s Modepaleis, it seemed it had for long been a slowly decaying tooth, awaiting surgery. After an architectural root canal treatment, the Fashion department established ”De Modenatie” only 10 years ago.

Antwerp’s Fashion Academy  shows us that it functions as a magnet for all sorts of talent within the arts it mingles and combines, and that it is that specific cross-media or even cross gender quality, if you like, that can make Antwerp Design so interesting. Having many of the designers teaching and working in and around the city centre, inspires young designers and paves the way to a successful career directly there or developing skills and knowledge under the watchful eye of renowned designers scattered all over the globe elsewhere.

Tip: visit the annual graduation catwalk shows and presentations of the Academy to get the full picture, as they are highly professionally put together..

This very special exhibition at MoMu runs until 16th of February 2014.