Our City by Maria Tarantino 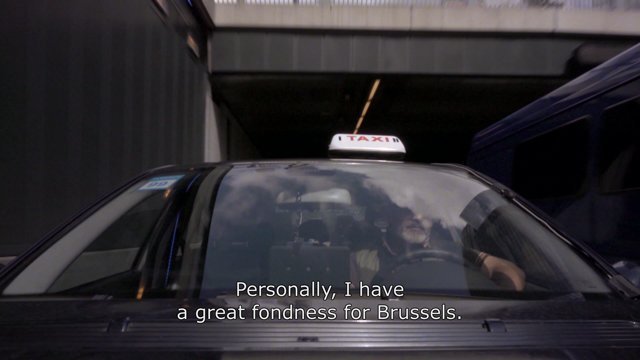 When shown first to an international audience at IDFA festival in Amsterdam last November in 2014, the documentary ‘OUR CITY’, made around the city of Brussels and its inhabitants was likely to be focusing on the many different kinds of people who have come there in the past and present to build themselves a new life in the heart of this chaotic city. Apart from various non-Belgian citizens that Brussels houses, the film also brings us up close to the headquarters of the European Parliament, present in all of its corners, besides the vacant real estate property issues the town faces.

Sliding in and out of daily life situations where we meet up with all kinds of workers, refugees, taxi drivers, youngsters, artists and even homeless illegal residents, Tarantino ( not related to the other fiction filmmaker) and her crew managed to cinematically merge all these lives into a bowl of hot stirring soup of a multi-cultural and eclectic nature. The amount of differences and ideas amongst all these people, the struggles they face, the various interpretations of the so-called civilised western world in which they happen to live, is in sharp contrast sometimes with other aspects of the more harmonious and nostalgic part of the heart of Belgium’s capitol, where most foreign visitors come.

The troubles to face and their richness in diversity that large cities in Europe and their inhabitants with so many cultural backgrounds dominate nowadays is even more interesting to observe and study, seen the terrorist violence now in Paris. (And recently in Brussels itself)
The film raises questions which still need to be answered for in times to come. It demands our attention to the question to what extend our national identity we claim to have is still valid, in a world that has been trotting towards a global community.

OUR CITY – a film by Maria Tarantino from maria tarantino on Vimeo.

Maria Tarantino in a press release:

The making of the film

Our City is a mosaic, a cubist portrait of the city, a kaleidoscope. I chose for it the
form of collage because it’s the best suited to expressing the diversity of the
inhabitants of Brussels. You could say, to continue the pictorial metaphor, that the
film uses “mixed techniques” to assemble very different situations that echo
each other in different narrative veins, without having to use voice–over.

The result is a film of choices and risk-taking, stretched between the chords of intellect and sensitivity, which required years of reflection before and after the shooting of the film. I could call the choice of “pieces” “structuralist”, probably because of my academic path, which incited me to think first about the “elements” or “atoms” of meaning that should make up the film and then find the best way to translate them into images.

For example, I knew I wanted to film representations of power like the decision-making process that makes up official Brussels. An EU summit had to be part of the film but should not take up too much place. I wanted to film youngsters and, through them, a possible future. I needed a school where we see how the teaching process trains youngsters but also deforms them. I wanted a bar, a wasteland, a squat, a worksite, an office, etc. And I also wanted people, immigrant workers, people who have no official papers and people who have them, an architect, a journalist, etc. For each idea, I checked out locations by filming them with the help of Klaas Boelen (who subsequently became the Director of Photography) and Maarten Schmidt (who subsequently became the producer of the film).