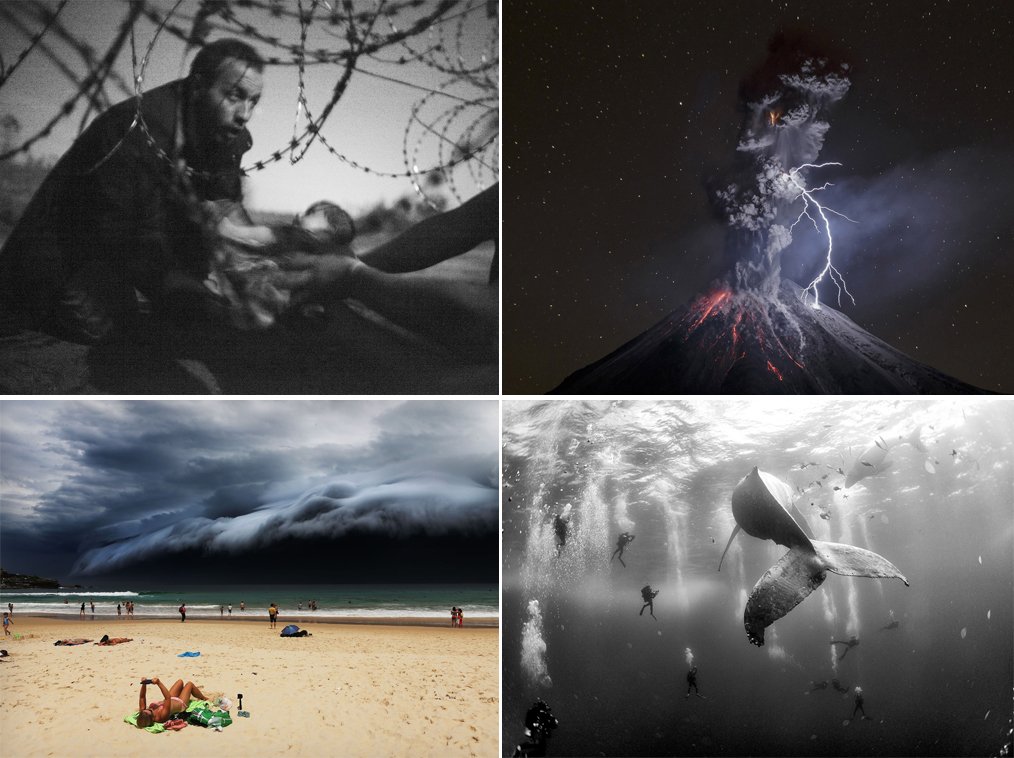 Winning photo and other shots from WPP16

World Press Photo is among the most influential photo exhibitions in the world and it cannot be denied that photojournalism is still and ever evolving.

The need for its messages brought together by thousands, creating more awareness and spreading knowledge of our planet and our existence on it, cannot be underestimated.

The award winning photo by Warren Richardson goes by the title ‘Hope for a new life’ in which a baby was handed over through barbed wire in a pitch dark situation along the border between Serbia and Hungary, photographed on August 28, 2015.

This exhibition of award-winning photos is shown worldwide in 100 cities and 45 countries, reaching a global audience of 4 million people each year.

The set up of the 2016 edition brings together the various facets, after a year which once again changed many perspectives on global issues in relation to our climate, the geopolitical shifts as a result of the Syrian war and much more. It also brings our attention to the correlation and impact of moving images, the Internet, virtual reality and the photographic medium of today in a broad context.

In his opening speech and lengthy talk at the press opening director of WPP, Lars Boering, stressed his need and desire to expand the number of locations and bringing this exhibition to areas of the world where free press and freedom of speech are diminished or endangered. For example, Turkey is one of the countries that is not among those who will be hosting this exhibition, mainly because of objections from its political leaders. Other countries that do host the event are for example China, Chili, and Myanmar.

WPP has been a successful event and was held annually in Amsterdam since 1955. Since then its international appeal and importance have spread out.

Today it stresses the importance of free press issues along with an increasing quest for expression over the internet and through multimedia, to which many contemporary photographers resort to, getting their message across on a global scale.

Although a member of the jury , Narda van ‘t Veer , also mentioned the tough task of selecting the best images from thousands of top quality photographs and stories, she is proud to present the selection for the exhibition including 41 prize winners from 21 countries.

Unfortunately, the much-awaited project ‘victims’, shot on location in Paris after the horrific assassinations on November 13, 2015, was withdrawn from the competition by AP, the photo agency that had initially submitted it.

The news cooperative said in a statement Friday that the photos, by Spanish photographer Daniel Ochoa de Olza, were submitted to the competition in error. They were never distributed by the AP, the company’s criteria for entering work in contests, because the originating photographers of the images had not given written permission for their use.

Daniel Ochoa de Olza ( photo above) also won second place in the same category for portraits of young Spanish girls sitting in decorated altars as part of a spring festival.

Many of the awards went to series shot on the borders of Europe and the Middle East covering the exodus from Syria and those from surrounding countries, trying to make it to safer lives and gaining access to Europe.

Also, the exodus of 140.000 people from northern Africa to Italy by boat in which an estimated 2.800 died in 2015, was esthetically documented in black and white. Photographer Francesco Zizola won the second prize for this series in the contemporary issues category for Médecins Sans Frontières (MSF).

An important side-project within the exhibition is ‘Streets of the World’, shot by Jeroen Swolfs, covering daily street life in all capitals of the world photographed over a period of 7 years time. Swolfs expressed his feeling that the longer he traveled and observed all the various cultures and people , the more apparent it became to him , that all these people had more in common than things in which they differ from one another.

‘Values of people’s daily life are the same all over’, he expressed in a long private talk standing beside a circular shaped video beamed installation of his color photos, placing the spectator in the center of ‘his take’ of our world today.

Apart from the ecological and political issues our world is facing, it appears that ‘ finding a safe place for all’, is at the core of this edition of WPP. This topic is clearly a short and long term assignment to work on for all of mankind.

Detailed info on where and how you can visit this extraordinary exhibition: