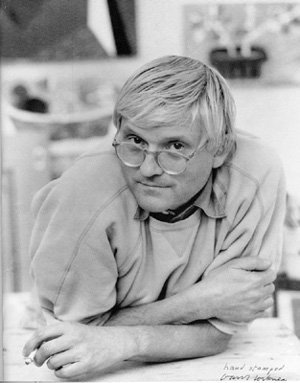 Born July 9 (The Day of Wonder)

The childlike joy of British artist David Hockney over his recent iPhone and iPad creations is infectious. We are captivated both by the fresh spontaneity of his work and his own Wonder over these modern electronic products. Being able to get up early in the morning and create art while still lying in bed is an activity that still amazes Hockney and the friends to whom he e-mails his latest creations. For years now, Hockney had been using photocopy machines, faxes, and Apple computers to create and distribute art, but his more recent work using the iPhone and iPad have been highly fruitful. Particularly of interest to him, and undoubtedly to other artists today, is a function on the iPad which enables the painter to view, in succession, the successive moves or changes that led to creating any given drawing, from the first finger entry to the final one. Hockney’s iPhone and iPad creations are currently being shown in 2011 in France, New York and Denmark. They are called iPaintings. These can be seen as a continuation of his 1985 work with the Quantel Paintbox computer program, again underlining his fascination with new means of expression.

The fun and wit in Hockney’s work over the years has dovetailed perfectly with his interest in new technologies, beginning with his Pop art creations in the 60’s. Along with Andy Warhol and others in America, Hockney used photography to create his paintings, arguing that many classical artists had done the same thing when projecting figures and objects onto their canvasses using the camera obscura. Not only a painter but an accomplished graphic and stage designer, Hockney has been especially interested in rendering the human figure, often in the form of outright portraits. He has spent many years in America, particularly in Los Angeles, where the vibrant quality of light, pastel buildings and freedom of lifestyle are attractive to him.

The playful qualities of his drawings and paintings are an eternal source of Wonder to Hockney’s many admirers. In helping to redefine the relationship between photography and painting, his work has consistently evolved over the years. Aside from his vivid, sometimes outrageous use of acrylic colors in city- and landscapes alike, his creation of what some refer to as homo-erotic art has also raised a few critical eyebrows. Of special interest is his series of 60 paintings called A Bigger Grand Canyon which, when put together, create one massive artwork. 74 years young today, David Hockney never ceases to astound us with his youthful, dynamic approach to art, sharing his visionary Wonder and amazement in rendering scenes from his fantasy as well as from everyday life.