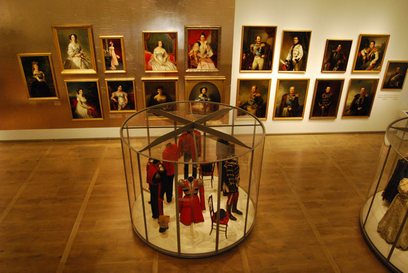 picture of the hermitage museum '' At the Russian court''

Amsterdam, 24 June 2011 – The Van Gogh Museum in Amsterdam will begin renovation at the end of 2012 in order to ensure the condition of the building and the safety of the visitors in the long run, Axel Rüger, director of the museum, announced today. Masterpieces by Van Gogh, including approximately 75 paintings and a number of works on paper, will remain on view during the renovation: they will be presented in the Herenvleugel of the Hermitage Amsterdam as of October 2012.

‘The Van Gogh Museum will undergo refurbishment during a period of six months as of the end of September 2012’, Rüger said. ‘In connection with this necessary renovation, due to sharpened legal requirements from the Dutch government, the Van Gogh Museum on the Museumplein will be closed from October 2012 through March 2013. Annually, approximately 1.5 million people visit our museum. We simply cannot disappoint them. This strengthened our resolve to do everything possible to maintain the collection’s accessibility. We worked very hard on finding a solution to keeping Van Gogh’s masterpieces visible to the public during the renovation. We are delighted to have succeeded in doing so. For the duration of the renovation we will be able to show our collection in the Herenvleugel, one of the Hermitage Amsterdam’s two exhibition wings.

‘This collaboration represents a marvellous opportunity, for both the public and us. We are talking about approximately 75 paintings and several works on paper by Van Gogh. The selection dovetails with the exhibition on Impressionism scheduled to be held in the Hermitage Amsterdam in the autumn of 2012. This show will be mounted in the Keizersvleugel and runs from 15 September 2012 to 15 March 2013. Art lovers will be able to see a splendid survey of 19th-century art by Van Gogh and his contemporaries in the Hermitage Amsterdam. This represents a rare opportunity, one not likely to happen again any time soon.’

The Van Gogh Museum is grateful for the Hermitage Amsterdam’s collegial support: ‘We went to great lengths investigating the possibilities for keeping the best works in our collection accessible to the great number of people from the Netherlands and elsewhere who visit the Van Gogh Museum annually. We were successful. In our view, this collaboration is a prime example of creative cultural entrepreneurship.’

Ernst Veen, director of the Hermitage Amsterdam, is enthusiastic about collaborating with the Van Gogh Museum: ‘There is extensive intercollegial contact. It is in the interest of the entire museum sector that collections remain visible and our desire to participate in this endeavour is only logical. Moreover, it fits in seamlessly with our 2012 autumn programme. This is a happy coincidence.’

The necessary adjustments to the museum – to meet the heightened security requirements for the visitors and the art – were partly completed in 2010. The second phase of the work must be finished by mid-2014, according to the agreement with the Dutch Government Buildings Agency and the Ministry of Education, Culture and Science.

Axel Rüger: ‘2013 is going to be a massively important year for Amsterdam, with festivities surrounding the reopening of the Rijksmuseum, and other celebrations, such as “Canals 400”, “Dutch Kingdom 200” and the Concertgebouw and its orchestra’s 125th anniversary. Amsterdam will be in the spotlight throughout the year and thus draw many Dutch and foreign visitors. It is essential that the museum is open then, both for the Municipality of Amsterdam and for us. Not in the least because 2013 is a special year for us as well: it marks the Van Gogh Museum’s 40th jubilee and Vincent van Gogh’s 160th birthday. We are celebrating this with an extensive exhibition and publication on Van Gogh’s Studio Practice, presenting more than 10 years of research on Van Gogh at work. We want to be optimally prepared for the anticipated activity this will generate: and after this much needed renovation we will be more than ready.’

About the Van Gogh Museum

The Van Gogh Museum in Amsterdam holds, manages and safeguards the world’s largest collection of works and letters by Vincent van Gogh. It includes such immensely popular paintings as The Potato Eaters, Sunflowers and Almond Blossom. With high-profile exhibitions and thematic presentations in the permanent collection, the museum places Van Gogh in his context and devotes special attention to his time and his contemporaries. The museum is also a research institution with an internationally renowned reputation among scholars. Annually around 1.5 million people from at home and abroad visit the museum. Accordingly, the Van Gogh Museum is the most visited museum in the Netherlands and ranks among the top 25 worldwide.

About the Hermitage Amsterdam