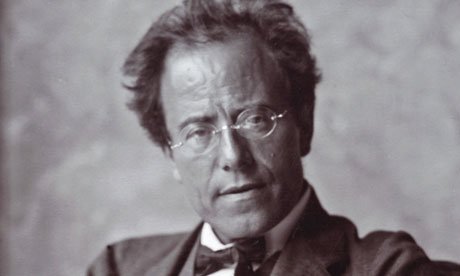 In my book The Secret Language of Birthdays, people born on July 7 are described as follows:

“Revelation is a recurrent theme in the lives of July 7 people. The urge to uncover or hold up to scrutiny the inner visions, feelings and thoughts of themselves or others is marked. Perhaps those born on this day could be called exhibitionists, but not in any superficial sense of the word. By revealing so much of themselves, July 7 people can effect anything from mild shock to disturbance in others, sometimes even an awakening. “

Both Mahler and Chagall fit this description, and the work of both has this inner visionary quality which is then trumpeted out to the world. Both came from small towns (Chagall in Byelorussia and Mahler in Bohemia) and left to eventually live in the most highly advanced cultural centers in the world (Chagall establishing himself in Paris, and Mahler in Vienna and New York), where they achieved international renown. Both were an interesting blend of traditionalist and modernist, and their ethnic background as Jews was to figure prominently in their creations. Yiddish Musical themes from the shtetl figure prominently in Mahler’s first symphony, as do the visions from Chagall’s paintings, the most famous of which is probably of the Fiddler on the Roof, from which the stage musical and film derive.  Yet neither of these artists was a practicing Jew; in fact Mahler rejected his religious background, converting to Christianity. Both were actively discriminated against before the Nazi era and their works banned during that time. Although their lives overlapped in the late 19th and early 20th centuries, Chagall lived to be 97 and Mahler only 51 (Mahler was born in 1860 and Chagall in 1887).

The creative work of these two cultural giants bear certain similarities. The works of both spring from a deep dreamlike atmosphere, floating in a highly imaginative fantasy world. (Listening to Mahler’s music while viewing Chagall’s paintings could confirm this similarity.) Each of them reveals a highly private world in their work, yet one that has deep cultural roots in ethnic areas. Their work points to visionary goals, expands our consciousness to cosmic proportions yet proceeds from a symbolic, unconscious, mythic world which occupied them both for their entire lives. Both were also highly proficient technically in their craft, particularly revealed by Mahler’s profession as an operatic and orchestral conductor, and Chagall’s later creations in stained glass windows.  Thus they were not only visionary artists but also individuals who were able to thrive in the world and become successful and recognized.

Another strong similarity stylistically in their art is that although they were distinctly modern in their approach, and influential, they were at heart Romantics who never really became part of the true avant-garde spirit of the 20th century.  Although Mahler was acknowledged by the revolutionary composers Schönberg, Berg and Webern, and also acknowledged them in return, and Chagall was influenced by cubism, fauvism, surrealism and abstract art, both of them found themselves early on in their lives as creative artists and remained true to their highly personal visions, in a way repeating their themes, developing their artistic ideas over and over again in quite a traditional manner. An analogy could be made between Mahler’s use of melody and Chagall’s representational and figurative qualities, both of which were often stated against expressionistic backgrounds that were both disturbing and dissonant. Interestingly, although Mahler’s work was neglected from his death in 1911 until the late 1950’s and early 60’s when it was resurrected by Leonard Bernstein and other conductors, this  period that lasted until Chagall’s death in 1985 was precisely the time when the works of both of them increasingly rose in stature through the many performances and exhibitions of their work. This recognition and acclaim continues until today, undiminished, earning such work the accolade of classic art.