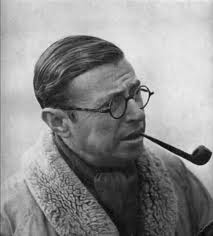 Probably the dominant French intellectual of the 20th century, Sartre was not an ivory tower philosopher but one who brought his philosophy to the people and took his stand on political issues. It is impossible to imagine that century without him (he was born in 1905 and died in 1980). The close to 50,000 Parisians who turned out to honor him on his death was an acknowledgment of his importance and a tribute to it.

This giant was physically small in stature and, like Napoleon, a giant  in his influence. As a philosopher, critic, playwright, screenwriter, and Marxist his words were followed avidly worldwide, but particularly in his own country. Although his output was prodigious, certain works stand out in his oeuvre. An early novel, Nausea, first brought him to the attention of the reading public. Like much of Sartre’s work it is a profound and uncompromising investigation of human emotions and the inner life of an individual.  Many readers reported being overwhelmed by the physical sensation of nausea when reading it.

In his essay Existentialism is a Humanism Sartre was able to spell out his philosophy in terms the general public could understand. In many ways Existentialism and Logical Positivism were the two warring philosophical camps of the last century, with Sartre heading the first (enriched by the literary and philosophical writings of Kierkegaard, Nietzsche, Camus, Dostoevsky) and Wittgenstein, Bertrand Russell, Carnap and A.J. Ayer the second.  In their search for meaning and truth the logical positivists sought to analyze language logically, even mathematically, particularly its use of signs and symbols, arguing that statements must be subject to rigorous analysis before they can be accepted as meaningful. The existentialists on the other hand believed in living life, often in the raw, in an uncompromising, confrontative fashion. The word existentialism implies that existence precedes essence, that is, living life and experiencing it is more important than defining and discussing it. Sartre was no less an intellectual than the positivists although their firm hold on the philosophy departments of the major universities sought to dismiss him, denying that his statements had any philosophical meaning.

Sartre wrote many plays and screenplays, the most famous of which was Huis Clos (usually translated as No Exit, although it has a specific legal meaning).  There are four characters in the play, and three of them (two women and a man) are introduced into a room by a fourth person and then locked in and left there for all eternity. Even late in the play when the door is opened they choose not to leave. The play explores the themes of human freedom, in a sense presenting the philosophical idea that we are all condemned to be free and that even in this closed hell (which in a sense is also our life) our existence is what we make of it. Albert Camus perhaps best represented the power of the human soul and consciousness in The Myth of Sisyphus in which the protagonist is condemned to the senseless task of straining to push a boulder uphill only to watch it roll back down after reaching the top. Because of his awareness of even the most senseless acts man thus can rise above his fate, and even, as Camus says, “be happy.” Thus Camus gives an ancient myth an existential interpretation.

Interestingly enough, Sartre’s private life was very revealing of his character, at least as much as his writings. He and Simone de Beauvoir (the leading French woman intellectual) were partners for half a century, and had a frankly open sexual relationship that included many other people. The two of them were the ruling king and queen of the French intelligentsia and stood shoulder to shoulder in many street protests, in their support of the people, as Marxist communists, but also in their devotion to and love for each other. Sartre was by far the more sexually promiscuous of the two, a subject not often openly discussed in the French press that traditionally accords privacy to its leaders in such areas. Being born on the Day of Worldly Rapture on the Cusp of Magic, it is not surprising that this intellectual writer and teacher had such a passion for life and an addiction to some of its most sensual elements.