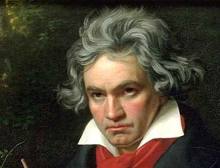 In the first presentation of Reincarnated Masters we looked at the line of Bach-Mozart-Schubert and Brahms.  Beethoven was absent from this lineage because I believe he was part of another one –  that is: Beethoven to Vincent van Gogh to John Coltrane.

These three artists in quite different fields, the first a composer, the second a painter, and the third an improvisatory musician,  lived creative lives that were remarkably similar. Of all the artists I know these geniuses most clearly followed and epitomized a path in which their work developed in three very well defined stages: an early period of apprenticeship adopting earlier models for their inspiration, a middle period in which their work flowered and their creative process became distinctly their own, and finally a late period in which they struck out fearlessly into the unknown, in the process bewildering those supporters who felt that they had lost it, even to the point of finding their work insane.

Beethoven’s models were clearly his teacher, Joseph Haydn, and the works of Mozart. Listening Beethoven’s his early works for the first time we are not sure which of these three composers we are listening to. Likewise, Vincent van Gogh found in the French painter Millet an important model for his desire to portray farmers who worked hard on the land under very difficult conditions (culminating in his painting The Potato Eaters). Coltrane found his models in Ben Webster, Coleman Hawkins and Charlie Parker, and he worked himself very hard to achieve their technical proficiency and depth of expression.

Moving on to their middle periods (Beethoven – Rasomovsky Quartets, Fifth and Sixth symphonies, Waldstein and Appassionata sonatas; Van Gogh – his impressionistic flowering in Paris; Coltrane – his jazz quartet doing My Favorite Things, Spiritual, Afro-Blue) all three artists achieved a golden kind of expression in which their masterpieces represented the full blossoming of their creative art, one masterpiece appearing after another).

Finally, in their late period just before their death each of these three master artists deliberately left behind everything they had achieved to strike out in a new, at times incomprehensible direction. Beethoven in his late string quartets, piano sonata opus 111, the Ninth Symphony and Missa Solemnis, Van Gogh in his late paintings in the south of France culminating in his almost schizoid representation of crows in the cornfields, and finally Coltrane in his wild, manic improvisations typified by the album Ascension.

As different as these three men were in background, nationality, period and genre, their creative lives followed almost exactly the same pattern. In fact, it is again tempting to think that each was the reincarnation of the same soul or spirit, given almost identical developmental tasks in their creative lives. Few if any artists have ever achieved the sheer intensity and dedication to art of these three figures.  That they were ultimately successful in navigating the perils of their impossible voyages, in refusing to give up until they had created what it was theirs to produce, to attain, is a further testimony to their monumental courage and vision.