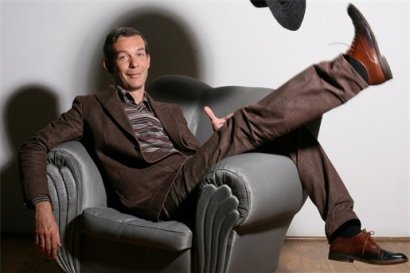 All out of the hat of Christophe Coppens

Christophe Coppens is a Belgian designer who first boggled my mind around ten years ago. At that time I used to live in Antwerp where I witnessed a ‘fashionshow’ of Coppens’ hats worn by models like in an ordinary catwalk show but far more more extravagant in size and utility. Head wear as an art form so to speak. Who would wear such items? What were the price tags for handmade object like these?

Only recently I met Christophe again during the opening of his exhibits in the Boymans van Beuningen Museum in Rotterdam and was bewildered by the variety of creations he meanwhile had been pulling out of his hat. Today many celebrities wear his hats and creations, many of them performing artists themselves. Playfulness and elegance appear to be his trademark, with a twist of humor on top.

At what point in time did his creations start to attract larger audiences? Today Christophe has his own shops in Brussels and Tokyo, where people adore his creations as much as at home in Belgium where he studied and grew up.

Due to TV recordings as a jury member for a young designer’s contest and appointments all over the place had little time for any  magazine or press related media. As a result I honestly had no other option then inviting myself to his Christmas party in Brussels where I hoped to meet up with him in his surroundings a few days before this magazine’s editorial deadline. Finally we settled for a telephone interview necessitated by our mutual tight schedules in the middle of December – the time when we all rush out for that last present for a loved one. Commuting from one place to another we spoke over a mobile phone in different countries.

Where did you grow up and which kind of activities did you like best when you were a teenager?I started off trying to become an actor and I did all in my power to become one through multiple studies and courses. Acting, dance, poetry, etc., etc…But soon I figured out that I was not able to be directed – I couldn’t let go – I was a director myself and besides that I was more interested in the imagery of theatre and not so much in he texts or other things. So because of the fact that during my time in the conservatory when we were sort of bored with classes we started our own theatre company for which I designed the accessories. The decors and costumes were made by me and I created a collection of hats. At a special event I invited my students and colleagues and their parents and they bought all my creations! A few photographers and members of the press were present too and suddenly I got picked up and received all kinds of press attention.The academy then forced me to choose between either theatre or fashion.
So a few weeks later I opened my first shop and quit school.

I first encountered your work at the turn of the century in the form of a fashion show of hats in Antwerp in a building called the Beurs- a giant well ornamented hall with video screens where at that time many important fashion shows took place. It felt more like a Las Vegas show instead of just a show by someone who creates mainly head wear and accessories. Do you remember that show and at what stage in your career were you at that time?

Ah yes! I remember that night- it was an event for the notaries league of Antwerp. It was quite hectic – yes. At that time people used to say: Your theatre is not theatre but fashion and later they started saying your fashion isn’t fashion but theatre. Because I never had a 4 years study to start with I was immediately submerged in real life – a shop – real banks for financing – real clients.
At that time I still wanted to do everything and I realise that only in the last 5 years I learned that omission is an important factor – to reduce the number of accents – to bring things back to the basics.

For me also your conceptual work – let’s call them artworks- have the same playful attitude like the wearable items that are sold in the many shops all over the world that distribute that special vision of yours. What do the words Humor and Play mean to you?

I guess I am just simply like that – humor is part of me. A certain depth and analysis, quite formal and classic, is what I start with. But I like to get an idea of what happens to it when I turn it inside out. As if you want to ”massage or balm and beat and hit” the object all at the same instant.
And it is also a typical Belgian thing – we have a saying : ”the thing is missing a corner” as in saying it is special- it has a certain touch which is giving it depth – another way of looking at it.

If you were able to choose to work only conceptually would that make you even more happy or is the fact that your garments and outfits actually are worn – also by celebrities like Roisin Murphy, Pete Doherty and alike – an even more important factor for yourself?

Celebrities are in a way not important. It is flattering when we receive word through an agent that we can design for a celebrity. It is a  welcome gesture and adds value also through the media. Press  people like that a lot and that is also part of the game. I do like the cooperation with Rasheen – a fantastic woman I admire – so that ‘s great if I can design for her and be part of her shows.
But the highlight for me is to really create – only part of my work is really creative – most of it has got to do with practicalities. Creating the items is percentage-wise just marginal – but this is what I truly enjoy most.

Can you say something about your relationship with Japan and particularly Tokyo where you have a store?

Japan is sort of my second home  – the people, ethics, food, the different layers of things. There is a duality too; many people I work with have a hard life – it s a tough society – every time I come back I am still learning after the 12 years we have worked together. It’s complicated and Japanese society has many layers.

Do you consider yourself to be ON THE MOVE as a man or as a designer?

On the move…yeah that’s how you can put it. What is annoying me today for example  – to make work that has a tendency to repeat itself – but you have to be, as you know, part of the global game,  where at the same time I enjoy the free work in for example at Boymans van Beuningen in Rotterdam in ‘the Art of Fashion‘ exhibition. But these installations do in a way not have a right to exist because they only cost money.

You mean finding a balance between them – real life and the creational part of it?

Yes that’s it – the balance between the business side and the creative artwork.

You are currently exhibiting in a group show : ‘The Art of Fashion’ at the museum Boymans van Beuningen in the centre of Rotterdam with designers like Walter van Beirendonck, Hussein Chalahan and Viktor & Rolf and others.
How would you like our idea of menswear to be altered in the future and how do you contribute to it?

For men I design far less opulent or extravagant clothes than for woman – it is subtle and in that way it is more interesting. A man will soon look like a cowboy – a macho,  gay or whatever –  if you overdo things. I design for men who wear Armani as well as the ones who wear Ann Demeulemeester. So for me the meditative kind of designing for men is far more satisfying and rewarding.

What do your near future projects involve?

Bigger and smaller projects – one of them is off course the Paris show at the start of 2010.
But I am also in an art project for which we still need to find the funding. But in general this is how life goes – with ups and downs.

Christophe thank you for this chat; I do not want to keep you longer seen the fact that you must have a lame arm and a deaf ear by now…