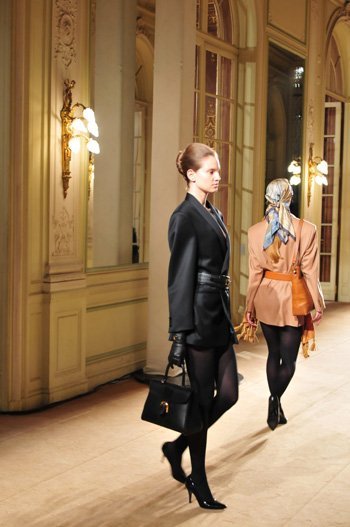 For insiders Delvaux – a luxury leather bags brand based in Brussels – is not just the oldest in the world of its kind. It is also still a fashionable one- the company has changed throughout the years and has taken many different craftsmen and designers on board.

Artistic Director Veronique Branquinho- herself a distinguished fashion designer- says:
I have a huge predilection for craftsmanship, for everything that is handcrafted. This is what Delvaux stands for. I have also striven to achieve certain timelessness, certain discretion. People who have a certain ‘spirit’, who seek elegance are my audience-in quest for a pleasing combination of contemporary and timeless. Time rejects anything made in haste.

Founded in 1829 Delvaux certainly withstood the tempests of time. An important binding factor is the fact that items can still receive service treatment for over 30 years later; a form of sustainable creation and service that the company has always offered his customers.
The pounding heart of Delvaux is in a fortress like building called the ‘’Arsenal’’. Although it’s fairly modernized setting today the workplace still breathes of old days when travel bags were made to last the challenges of long travel and heavy weather. Today a new layout gives the craftsmen their own worktables with storage space for tools and materials. Many of their tools are handmade by themselves to tackle the various operations they have to perform. The team works on sets of 20 items at a time and each set requires about two weeks work. Averagely spoken making a handbag takes 7 hours and around 200 items leave the workshop each month.

Ceci nést pas un Delvaux
In time obviously fashion changed and with it the utility of the diverse bags. Where woman handbags emerged in the midst of the 20th century and became extremely popular in the 60-ties and onwards, before then Delvaux’s interests were maybe more focused on strong but elegant travel bags. Produced and sold in only 200 examples of each type we should consider the fact that a Delvaux is still a handmade collectors item.

The Men’s Line
A few years ago Bruno Pieters- an Antwerp Academy graduate and creator of the Hugo range of Hugo Boss-joined the team in creating the 1829 Men’s line. He especially enjoys the longevity and the quality of the products he is making.