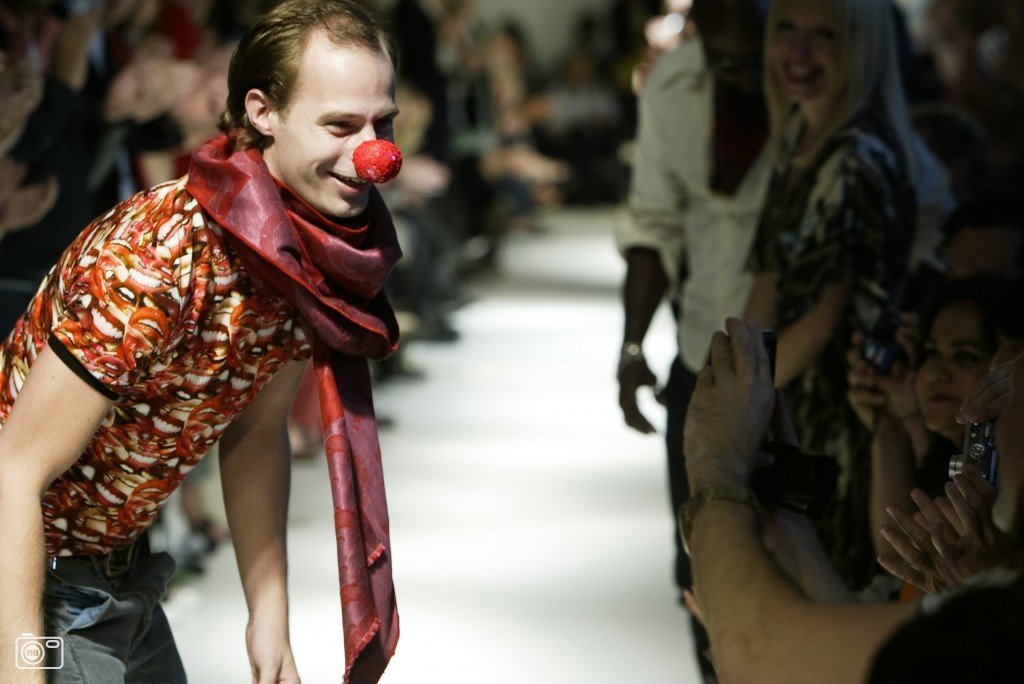 A designer – and self-proclaimed soccer fanatic – with an extensive fashion education and impressive credentials, Antoine Peters graduated cum laude from the Art Academy in Arnhem, completed a master’s at the Fashion Institute Arnhem, and worked for the Dutch fashion house Viktor&Rolf. He is well known for his A SWEATER FOR THE WORLD! project in which he created a sweater large enough to cover two people with the goal to photograph as many ‘different kinds of people’ as possible wearing it. In a mere couple of years, Peters was beginning to draw the attention of the international press for his pop-culture inspired designs and was even honored with being named one of the world’s one hundred most innovative young designers in Hywel Davies’ book 100 new fashion designers.  His work has been showcased in other publications including Fabric for Fashion by Clive Hallet, Textiles and Fashion by Jenny Udale, and Graphics in Fashion by Jay Hes and has been noticed by leading fashion magazines and blogs such as Vogue Italy, Dazed, “A Shaded View On Fashion”, and “Style Bubble”.  His work is not limited to the high fashion realm, as he designed the volunteers’ costumes for the Arnhem Fashion Biennial 2009 and has participated in numerous collaborations with iconic brands such as United Nude, Effio, Quinze & Milan, and Film Festival Rotterdam.  Most recently, he launched his ANTOINE PETERS x EASTPAK collaboration which is currently sold in the Benelux, Italy and leading shops worldwide like Seven New York, Corso Como Milan, SPRMRKT Amsterdam, Margreeth Olsthoorn Rotterdam and Hunting & Collecting Brussels.

Peters is known for his layered and innovative style and is praised for his work’s optimism, playfulness, and renewing form of elegance. His cheerful and upbeat perspective on fashion as a whole manifests itself in the ethereality of his work, an element apparent in both the fundamental concept and final execution of his garments. But most importantly, Peters aims to implement the best components of nonchalance and sophistication, blending ideas to illustrate his unique perspective – “one size fits all elegance”.

Amsterdam – Antoine Peters will be marking the launch of his new collection “GET DIZZY!” with a video installation at Droog Amsterdam opening on July 1. Inspired by the dizzy sensation induced by the speeding up of the world or by making a spontaneous somersault, the collection mixes and even fuses clothing, wearer, reality, and fantasy. The video was a collaborative artistic effort realized with the help of Marc Deurloo (photography) and Krause & Jeroen Joosten (soundtrack). The video is available at www.antoinepeters.com and the exhibition will be on display from 1 – 16 July at Droog, Amsterdam.

“For ‘GET DIZZY!’ I again experimented with alternative ways to present fashion. And instead of just making a video, this time I wanted to actually fuse together the images, music and garments into one fairy-tale world and one story.”

Peters created the video with the intention to embody the spirit of his new vertigo-inspired collection. The video commences with a young woman in a polka-dot T-dress and as she starts to spin, the dots on the fabric of her dress become ‘stretched’ by the speed. The outfits that follow appear increasingly ‘twisted’ and ‘entangled’ in detail, graphics, pattern, and silhouette. As a culmination to the short film, the last look appears to defy reality; the 5 meter long spiral dress fully exemplifies Peters’ vision.  All of the featured garments are original designs and the shoes were created as a joint effort with Jelske Peterson.

The video and collection will be exhibited from 1 – 16 July at Droog, Staalstraat 7b Amsterdam

The video can be watched via www.antoinepeters.com

Or embed the video yourself: http://www.youtube.com/embed/I_PS1pI5nEY