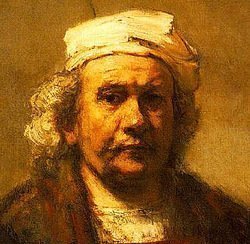 Although many streets in Amsterdam are named after painters, only one of its major squares is named after one: the Rembrandtplein.  Not surprising that this Dutch master is honored by a city and country who have undoubtedly produced more great and good painters per capita than any country in the world. Many reasons have been put forward as to why Holland has excelled in painting. Some feel it was the unique quality of its indirect light, others the hundreds-of-years-old tradition of painting in that tiny land. Perhaps, the most telling argument is the fact that a painting was a physical object that could be bought and sold, hung in one’s office or house, commissioned as a portrait or group representation. This last fact is underlined by Holland’s world pre-eminence in the 17th century (its Golden Age), in which Dutch commerce and trade flourished. Painters like Rembrandt did not belong to the highest strata of society by any means but were proletarian workers like any others. But the best of them made their livings largely through receiving valuable commissions from the wealthy, prominent merchants so successful in world trade. So-called Stadthouders (powerful city council representatives) ran the city and from their lofty position enjoyed giving commissions to prominent Amsterdam painters. Also the growing middle class, the bourgeoisie, was always on the lookout for lower-quality paintings that they could acquire at good prices to hang in their homes and shops. So paintings in the Golden Age became status objects, highly valued both aesthetically and monetarily.

Making a good living as a painter in those days was not easy. Keeping alive in that highly competitive field often depended on one’s personal relationships with the wealthy Stadthouders and other prominent political figures. Rembrandt did not have an easy personality that kow-towed to the city elders and thus his position as a free-lance artist was always somewhat precarious, eventually resulting in his being declared bankrupt. He was very prolific in his work, creating hundreds and hundreds of paintings, drawings and etchings whether he was paid for them or not. Being a painter was expensive too, since the upkeep of a studio that included paints, canvas, brushes, rent,  assistants and house servants was considerable, particularly during lean times when one’s paintings were not selling.

Among Rembrandt’s many well-known masterpieces viewed today in artbooks and musea are The Jewish Bride, Return of the Prodigal Son, Aristotle Contemplating the Bust of Homer, Pallas Athena, Bathsheba, The Blinding of Samson, The Anatomy Lesson of Doctor Tulp, his two most famous of many self-portraits showing him as a young and later an older man, and finally his most monumental and world-renowned work The Night Watch (1642). Attacked with a spray can (1990), more seriously by a knife-wielding maniac (1975), and earlier in the century by an out-of-work protestor during WWI, this painting has attracted its share of aggression but each time was lovingly repaired so perfectly by the skillful art restorers of the Netherlands that today it hangs in Amsterdam’s Rijksmuseum in its full glory.  This 12×14 ½ foot work of art still impresses us today with its immediacy, its mastery of light and dark (chiaroscuro), and the unreal 3-D effects of its main figures and their weapons. Fittingly, the city of Amsterdam placed a group of life-sized 22 bronze statues inspired by The Night Watch (created by sculptors Alexander Taratynov and Mikhail Dronov to honor the painter’s 400th birthday) in the Rembrandt Square from 2006-2009. Today the installation is absent from its home as it is on tour in America and Russia.  In fact, Rembrandt’s drawings, etchings and paintings have also travelled much further around the world than the painter ever dreamed of travelling himself. There is no convincing evidence that Rembrandt ever once left his native Holland.