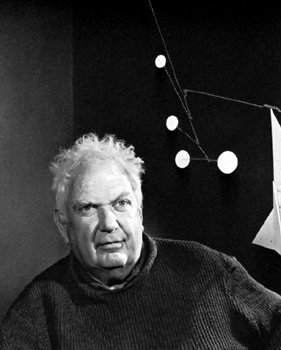 Alexander Calder and Edward Hopper both made significant contributions to American art. Although they each explored several art disciplines, Calder was known primarily as a sculptor, who first created the hanging objects called mobiles, and Hopper as a painter. Both were born on the East Coast of the United States and both visited Paris for artistic inspiration, Hopper before WWI and Calder after that war. Hopper returned to America after his Paris period and lived most of the rest of his life in Greenwich Village while Calder settled in France for many years and became an important member of the French art scene there, returning to the US in the mid-thirties but then relocating again to France in the sixties. His associations with Paris and New York were strong throughout his artistic career.

Perhaps the biggest difference between these two American artists, aside from the fact that Hopper as a painter worked in two dimensions and Calder as a sculptor in three, was Hopper’s extreme realism and Calder’s development toward producing increasingly abstract art. Best known for his typical American scenes, notably of buildings and diners, Edward Hopper portrayed American life in an objective, representational, highly realistic manner. Yet looking at his paintings one recognizes the abstract qualities of intersecting planes and highly personal use of color in his works, which although giving the impression of photographic realism at first glance, in fact on deeper examination betray a preoccupation with form, space, and painterly textures and tones (much as Van Gogh and Gauguin had done before him).  Perhaps Hopper’s paintings remind us most of  those which the highly realistic Dutch painter Vermeer had done centuries earlier. In fact, Hopper could even be called the American Vermeer.

Despite their differences then, Hopper and Calder both showed formal, structural similarities in their approach and in their individual explorations of space, line, texture and pure, vivid color were often  quite close. This is supported by acknowledging the mutual influence they had on later schools of American art, particularly pop art, cartoon art, as well as installation and street art. Another element of their mutual work that brought them closer together was their wit, humor, irony and social commentary.

Being an artist in America has never been an easy, and often has proved a thankless task. The government, whether at the national, state or local level has never substantially encouraged the arts, aside from their support of art schools and symphony orchestras. This has made the life of an artist quite uncertain, filled with ups and downs, small triumphs and major reversals of fortune. It has also made it necessary for thousands of American painters, composers, poets and novelists to take jobs that had nothing to do with their art just to stay alive. It was and still is not uncommon for a painter to work a full- or part-time restaurant, house painting, or construction job as their bread gig while creating art in their time off. In this sense, whereas a European artist tries to live on commissions and grants, American musicians are resigned to in fact subsidizing their own careers through a non-artistic paying job, hoping to sell the occasional canvas or art object.

Both Calder and Hopper were fortunate enough to come from families that encouraged and supported their artistic efforts. Calder’s father and grandfather were both sculptors, so his career decision hardly was surprising or met with disapproval. Hopper, however, had the rougher time and for years had to compromise by taking jobs as a free-lance magazine illustrator, work which he hated doing but found necessary for the support of himself and his family.

Both artists began to achieve fame in their 40’s and 50’s after years of study, hard work and devotion to their craft. Each was extremely prolific, creating thousands of works of art. Although Calder was by far the more public figure, both artists were fortunate enough to achieve recognition and reward during their lifetimes.