Note: Van Beirendonck and MoMu closed the following exhibition with a total of 56.000 visitors in February 2012.

The entire work in the field of Fashion design with all his collections and collaborations can be observed in close detail on close to 90 (!) rotating platforms in the Antwerp MoMu. On the side walls many of the video documents on his shows can be seen along with the sources of inspiration he had at the time of creating the collections and parts of his ”scrapbook” with notes and ideas.

From the very first start when I first encountered the work of van Beirendonck he has been able to stun and shock the international audience by daring creations with the use of materials not often applied in fabrication. Also we should consider the vast impact that the designer has had on entire generations of young designers as he has been teaching at the renowned fashion academy in his beloved city of Antwerp. Noteworthy is his collaboration with pop icons Bono and his band U2, for which he designed the outfits for their pop mart tour in 1997.

Over three decades, Van Beirendonck has built up an impressive international career. He is the maverick of the Antwerp fashion scene and became primarily known for his colourful designs, his spectacular fashion shows in Paris in the 1990s under the W.&L.T. label, and the critical messages on society he proclaims in his designs. His work combines the most diverse sources of inspiration, ranging from technology, art and pop culture to ethnography. 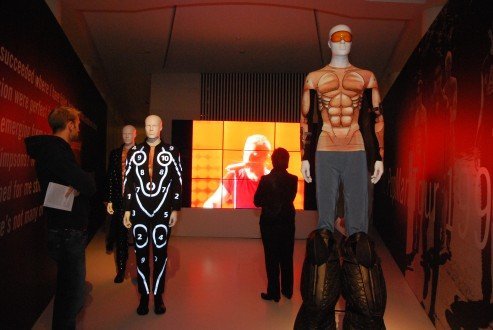 In addition to many of the most exceptional silhouettes from Van Beirendonck’s collections, the exhibition provides an overview of the world he lives in, his sources of inspiration and his numerous other projects. By way of different themes, it takes a deeper look into the narrative character of his oeuvre, his fascination for ethnography, spiritualism and the supernatural, rituals, science fiction and technology.

The exhibition reveals how Van Beirendonck examines the frontiers of beauty, creating his own interpretations of concepts imposed by society, for example, in terms of gender and sexuality, and how he incorporates topical themes, including ecology, Aids or mass consumerism into his collections and presentations.

Apart from his sometimes dark and always futuristic looking ensembles, the W.A.L.T. (wild and lethal trash) also appeal by means of another maybe simple but important factor. Walter uses simple but strong colours within his collections that keep coming back over the years. Photographed all together in a semi-circle close to 270 degrees group photo at the far end of the exhibition space, they convey a clear and strong message: Live, break free, be different…and so on. Through that aspect one could even make a striking comparison with brands that are on the other side of the spectrum, like Benetton for example. The use of greens, reds and yellow do not indicate a loving and harmonic world to this designer, but do remind us of simple aesthetics. Basic in terms of ” primary or true colors”.
I believe from what I saw that also small children feel attracted to the rotating silhouettes and although the models are much taller than these pupils are, they do not frighten them. This may seem an unimportant observation, but to me it does say a lot. Walter designs for everyone in society and playfulness -having an open mind-is one of his key ingredients. 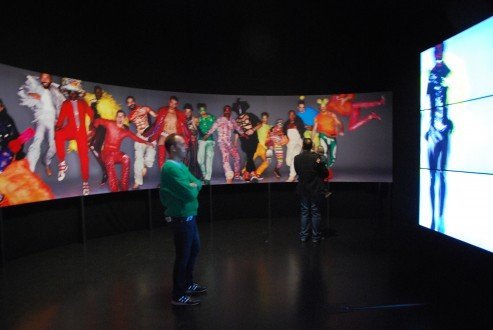 Funny detail is that his own shop which is no further than a 100 metres away from the Museums front doors, is obscured by a roadblock and works on the streets’ pavement. It seems that the person and the business of Van Beirendonck will always have this character: an ongoing body of work, always in process and heading for something new, digging into the bowels of life and what lies on the surface of our daily existence. It can be considered the true nature of Walter.

He has moreover collaborated with fashion photographer Nick Knight/SHOWstudio.com, stylist Simon Foxton and GQ Style UK to develop a new photography and video project created especially for this exhibition. 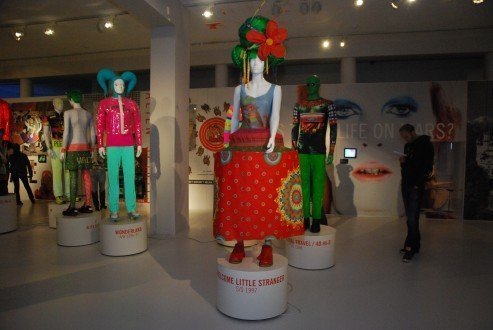 Note added in January 2012 on the WALT shop:

Thirteen years after having opened the first ever Concept Store, fashion designer Walter Van Beirendonck is forced to close his store in Antwerp. The reason for this decision is a dispute with the owner of the premises who wished to increase the rent by 250 percent.

Van Beirendonck: “Under these conditions it is no longer possible to work at the current premises in a profitable manner. Regrettable as this may be, it allows me to invest more time and energy in my own collection, which was recently applauded by the international press and buyers during fashion week in Paris. Besides, my function as creative director of the Fashion Department at the Royal Academy of Fine Arts in Antwerp, there are a number of new challenges ahead of me. Finally, I am not ruling out the creation of a new store concept linked to my collection.”