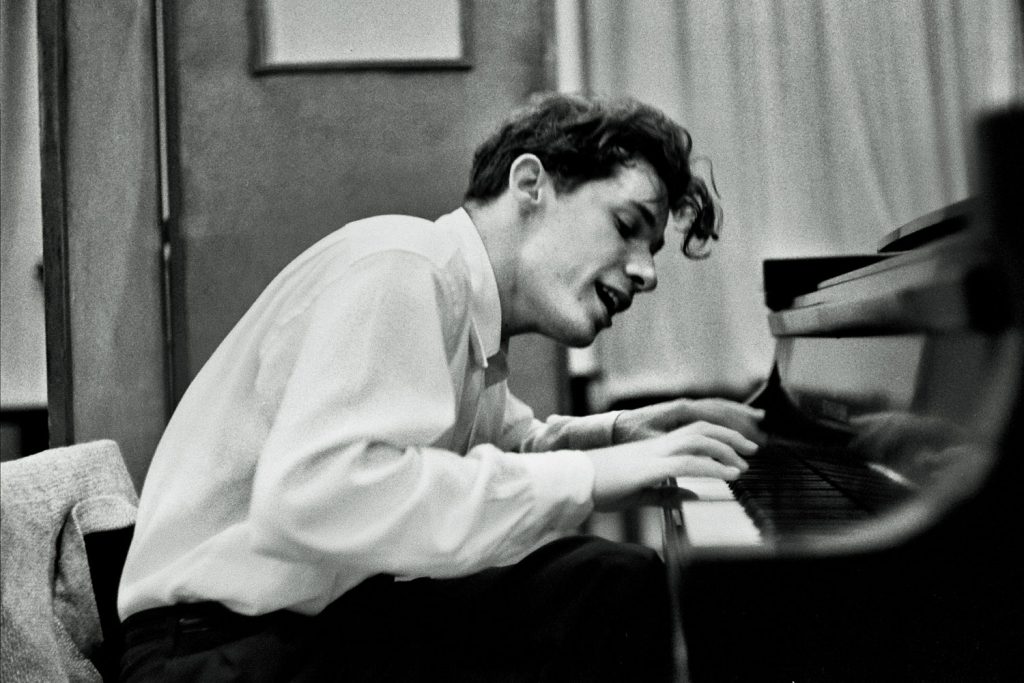 I had already seen the Canadian pianist Glenn Gould in concert at his Philadelphia debut, and had also heard his recording of the Goldberg Variations, so in a sense I knew what to expect. But I was curious also to see how a European audience, a highly sophisticated one, would deal with this eccentric pianist. Gould did not let his audience down. He came bounding onstage and after acknowledging his audience with a grand gesture, seated himself on the chair specially built for him by his father in Canada. The audience had already been eyeing this strange contraption, unlike any concert stool they had ever seen. When Gould sat down the audience gasped, since it was evident that the chair managed to put Gould’s  eyes close to the level of the keyboard, particularly when he bent over the keys, close enough to lick them.  Before beginning, Gould smiled impishly at his listeners, then proceeded to cross one leg over the other, half-turned back to the piano and proceeded to play the entire Goldberg Variations through without a single hesitation or note mistake (or use of the pedals). This audience was hearing a totally different piece from the one they were used to –  not their Goldberg Variations, but his. The absolute silence with no applause at the end of the performance indicated that they were in a state of shock and unable to respond – a kind of homage to Gould’s brilliantly unorthodox interpretation and awe at his technical skills.

The rest of the program included Schönberg, Sweelink and Mozart. Gould’s habit of providing vocal accompaniment as well as conducting himself (at no extra charge) was notably disquieting to the Austrian music cognoscenti but not to Gould, who was having a grand old time.  However, the point was driven home that whereas certain liberties could be allowed to his performance of Bach (a German), that with his unusual approach to the Viennese and Salzburg schools of Schönberg and Mozart they were being attacked more directly….in their own home, as it were.

Whereas it was the clarity and uncompromising artistic vision and intelligence of his interpretation they had to deal with in his treatment of Austrian composers, in the first half of the program they had already had their brains scrambled by the unbelievable tempos he set in most of the Goldberg Variations (also in the unbearable slow one, the black pearl, number 25: slow, slower and my-god-has-he-stopped?) However, in the fast ones, this was not a cascade of blurred notes – each tone was immaculately articulated and crystal clear. It is just that no one had ever heard them (or anything else) played so fast and flawlessly. Personally, I felt it was obvious that Gould was remaining true to his vision that I had already heard on his Columbia recording of the piece and also the Philadelphia performance I had attended.

Lenny Bruce used to say: “Fifty years of PR and all the Canadians can  still come up with is a guy standing in front of a shack holding a fish.” We think of this and of Louis Moreau Gottschalk who was refused admission to the Paris Conservatory on the grounds that he was an American, and how could an American possibly play the piano? It was kind of like that at Gould’s Salzburg concert. Was it really possible that they were seeing and hearing accurately or was it just a bad dream –  a living, breathing, nightmare that they could not awaken from?