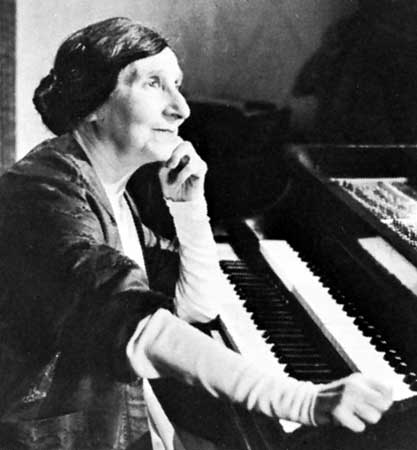 Wanda Landowska
Born July 5 (The Day of the Showman)

The harpsichordist Wanda Landowska was one of those very special soloists and musical specialists who devoted her life to her keyboard art with absolute dedication, not really aiming or caring for fame, beyond what was needed to insure her a full concert and teaching schedule, living and concertizing primarily in France and America. Among those other solo musicians of her generation were cellist Pablo Casals, pianist Arthur Schnabel, violinist Joseph Szigeti, and guitarist Andre Segovia. All of these musicians transcended their own mastery of a given instrument and were admired by the public as musicians first, virtuosos second. Landowska was the only woman of her time to reach this high caliber of playing, study and expression.
Born a Polish Jew, Landowska quickly established herself as a fine pianist before turning to her great love, the harpsichord. At that time, at the end of the 19th century, the use of the harpsichord had been completely abandoned in favor of the piano. Bach, if he was performed at all, was only played on the piano, but it was Landowska in the twentieth century who single-handedly brought his music back on the instrument for which it had originally been written, although the  concert instrument made for her by Pleyel was very different from the ancient keyboard instruments still surviving. Since that time, needless to say, the whole revival of ancient music, and particularly of Baroque keyboard music begun by her has been continued on authentic period instruments very close or identical to those used between 1600 and 1750, the year of Bach’s death and the end of the Baroque period.
Landowska studied and performed Baroque music for most of her life, but her favorite composer was Johann Sebastian Bach. She was among the first to perform and record his Goldberg Variations, the complete Well Tempered Clavier, and many more of his numerous keyboard works. In a famous repartee with Casals, after the two had expressed differences of opinion with each other concerning ornamentation in Bach’s music, Landowska said: “You play Bach your way, and I’ll play him his way.” Landowska’s writings on music, written as an accomplished scholar as well as monumental  interpreter, are still a must read for any classical musician.
Videos and films are also available of not only her concerts but also of interviews and practice sessions. Combined with her many high quality LP recordings, transcribed to CD and DVD, we are given a marvelous  opportunity to describe and assess her art. What stands out above all are two characteristics: first, a clarity of playing combined with an extreme refinement and intellect; second, an exciting, dynamic yet highly flexible rhythmic drive and free creative expression perhaps unparalleled in classical music performance. Pianists are trained from the start to play with independence of fingers, but with Landowska each of her ten fingers assumes an unreal, almost freakish singularity in rendering the polyphonic structure of Bach’s fugues on her two-keyboard modern instrument. Her unbelievable finger calisthenics in reaching, holding, striking, and pressing the keys over two keyboards are still viewed with incredulity. Moreover, we hear every note perfectly placed, but with phrasing and intelligence rarely if ever equaled.  As Virgil Thompson, the noted American critic and composer said after her Town Hall debut in 1942: “She plays the harpsichord better than anybody else ever plays anything.”
Madame Landowska became the reigning high priestess of Baroque music.  Calling her the outstanding woman keyboardist since Clara Schumann does not in any way diminish the importance of Clara Haskil, Rosalyn Tureck, Sylvia Marlowe, Agi Jambor, Martha Argerich, Maria Joao Pires, or Mitsuko Uchida, but all owe a debt to Landowska’s groundbreaking achievements in not only bringing the harpsichord and its literature to the public’s attention but establishing herself as a woman among the leading musicians of her (or any other) time.
– Gary Goldschneider