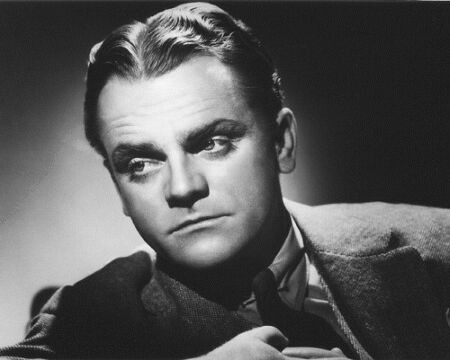 Often playing tough guys, hard as nails, both of these dedicated  Hollywood actors were prominent male leads whose careers each spanned over 50 years, with Sutherland still active today. Interestingly, Cagney’s career came to an end in 1961 (he returned  only briefly in 1981 to do the film Ragtime) and Sutherland’s began in 1962, so between them they covered 100 years of film history. Both played tough guy roles, figures not at all averse to physical confrontation but also with a highly sensitive side. Perhaps their most dominant acting trait was their ability to portray highly complex, difficult, edgy, highly realistic and psychologically troubled characters.

Cagney was of course one of the most prominent leading men in film history, joining immortals such as Humphrey Bogart, Gary Cooper, Jimmy Stewart and Spencer Tracey at the apex of Hollywood stardom. In unforgettable roles, such as in The Public Enemy and White Heat he forged a Hollywood persona that made him well-known to the entire American public and all film goers. Yet, though he played very violent gangster roles, in real life he was a shy, retiring figure who spent most of his time off the screen at his farm hideaway as a faithful husband and devoted family man.

Sutherland also has that edgy personality that Cagney displayed as well as the ability to craft and portray characters realistically. He sprang into stardom playing Klute in the film of that name, opposite Jane Fonda, and other hard-edged roles followed in the films A Dry White Season and notably as the intelligence officer who in Oliver Stone’s film JFK sits on a park bench with D.A. Jim Garrison (Kevin Costner) and gives him a quick lesson on political realities. Sutherland has had the lead role in many thrillers and horror films.

My Personology research has shown that birthdays of notables in any given field of endeavor tend to be clumped in the same week or month rather than distributed evenly over the year. This can be seen for example in the case of the three most gifted prodigies of classical music, Mozart, Schubert and Mendelssohn (born between January 27 and February 3), the preponderance of the giants of jazz being born between  August 29 and October 21, and the clumping of the birthdays of many film directors between August 11-18 in the Week of Leadership. The highest concentration of the major male Hollywood stars is found between July 3-17: featuring Sylvester Stallone, Tom Cruise, Tom Hanks, Harrison Ford, Kevin Bacon and of course Cagney and Sutherland.

All of these stars certainly have an attitude, a low threshold of irritation, that is unmistakable but in addition to their aggressive  qualities they have a very powerful inward, sensitive side that endears them to their many fans. Perhaps the key to their characters is their ability to convey an empathic image and to act as living, highly human projections of the secret dreams and wishes of the viewing public.